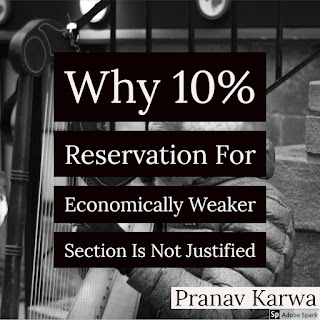 “Poverty solely cannot be the test for backwardness as in this nation except for a small population, people are generally poor. Thus, in identifying backwardness, you cannot include sections which are socially and educationally advanced because it would frustrate the entire object of reservation”
– Supreme Court of India in Janki Prasad Parimoo v State of Jammu and Kashmir (1973).
This article analyses the two challenges to the new income based reservation, the first is the constitutional validity of the amendment and the second is the implementation of the new scheme. Earlier this year in January, the government introduced the 103rd Constitutional amendment act, 2019 allowing 10% quota in government and educational institutions for the economically weaker section within the general category.  The effect of the act is that it amends Article 15 and 16 of the Constitution, by adding a clause which allows the reservation. Just a day after the bill was passed in the Rajya Sabha, a Public interest litigation was filed challenging the amendment on the ground that it is in violation of the basic structure of the constitution. In Indra Sawhney v Union of India, capped caste based reservation at 50% and said that income cannot be sole basis for reservation. The reasoning given in the Indra Sawhney judgment was that constitution is mainly deals with social and educational backwardness and that income cannot be the sole basis for exclusion from jobs. Even the Constituent Assembly never considered a disadvantage solely in income terms for reservation.
Further, there are practical difficulties in giving effect to this this amendment, the definition of economically weaker sections as the government by putting the limit at rupees 8 lakh per annum and people having less than five acres of land has tried to bring more and more people within the ambit of the definition. Further, an empirical study finds that this category of students had already representation around 28% in around 445 higher education institutes, rendering the quota pointless.  In absence of data, the government has no idea as to how many people within the upper caste are actually going to benefit by this move.
Further, recent research by French economist Thomas Piketty’s show that wealth and not income of a household is a better criteria for considering inequality. Wealth itself is a source of income, for example you can earn rent by giving your land on rent or earn dividend by purchasing shares. Thus income limit of 8 lakh set by the government seems to be not in consonance with the ground realities.
This is not the first time that such an amendment has been proposed, earlier in 2016, Gujrat government proposed similar ordinance providing 10% quota to the upper castes. However the same has been quashed by the Gujrat High Court and appeal is pending before the Supreme Court.
Although one might argue that the Indra Sawhney limit is applicable only for the socially and educationally backward category and thus is outside the purview of the present constitutional amendment, but in my opinion the intention and the rationale  given by the government has to be analysed to get a clear view on the issue. The government is certainly motivated by political factors to bring in the amendment, the amendment is to satisfy the Mararthas, Jats and several other communities of the upper caste who are agitating for reservation over the past decade or so, however the amendment begs the questions, when there is huge difference in economic status in the particular group and the group has not faced any social discrimination is it justified as per the principles enshrined in the constitution and judicial precedents to give reservation to the entire group?
In defense of the scheme, some have argued that the “economically weaker section is already recognized in the Right to Education Act, 2009. The term used in the RTE Act is weaker or disadvantaged section includes SC, ST or any group which has disadvantage due to social, cultural, economic, and geographical and so on and so forth. Thus it can be clearly seen that the weaker section as defined in the RTE Act is in no manner similar to the definition of economically weaker sections as in the 103rd Constitutional Amendment. The definition of “economically weaker sections” is vague as it does not elaborate on what are the “other indicators of economic disadvantage” and just leaves it to the determination of state from time to time, thus creating room for arbitrariness.
Thus if we just take income as a ground for providing reservation over the already existing 50%, the justification for reservation is not to provide social justice to a group which was discriminated against, which was the intention of the drafters of the Constitution but to serve as a poverty alleviation scheme on par with MNREGA and many other such schemes. Thus the argument is that providing reservation solely on economic basis was never the intent and reason behind formulation of reservations in the first place. There are many ways to reduce poverty, however reservation is just not one of those ways a reservation should not be equated to a poverty alleviation scheme.
According to John Rawls concept of justice of fairness, the three principles of justice are to be applied in lexical priority. The first principle being that of formal equality thus has to be ensured first before going to principle 2a which talks about fair equality and which is the justification for reservation in his theory. Thus it can be clearly seen here as well that reservations under Section 2a can be justified as long as there is formal equality in the society, however if the scope of reservations is so expanded so as to dilute formal equality itself under principle 1 that reservations cannot be justified.
Thus, the effect of 103rd amendment is that it enhances the representation of the privileged castes who already have enough representation and thus cannot be justified.