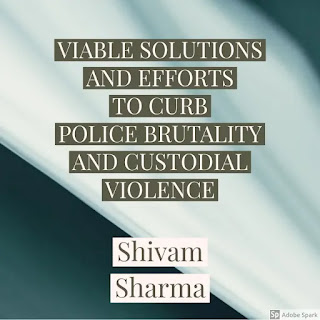 Police brutality is also known as police violence which is legally defined as a civil rights violation where officers exercise undue or excessive force against a civilian and include physical or verbal harassment, physical or mental injury, property damage, and death, etc.

Custodial violence means violence in police custody and judicial custody. Some of the provisions, laws or Acts like Sections 330, 331 & 348 of IPC; Sections 25 & 26 of the Indian Evidence Act; Section 76 of CrPC and Section 29 of the Police Act, 1861 were enacted to curb the tendency of policemen to resort to torture to extract confessions, etc.
Causes of Police brutality & Custodial Violence:
Why it is in talks Today?
Nation-wide protests against CAA and NRC have exposed the police’s heavy-handed approach towards the protestors. Many of them alleged that the disproportionate and indiscriminate force applied by the police. In some states, reports indicate of custodial torture and ransacking of homes. Custodial deaths are on the rise as 427 people have lost their lives in police custody between 2016 and 2019 as it was 282 between 2013 and 2015. According to a survey, 83% of the police personnel believed that a violent approach towards criminals to extract confessions is good for society. Recently, the Supreme Court called for police reforms and the NITI Aayog also presented its recommendations. But in the amid of such deliberations, the police violence continues.
Police as a Political Instrument
Since the relationship between police and citizen is feudal. But in recent times, after the prime minister’s 24th March 2020 call for the 21-day lockdown across the country, Uttar Pradesh chief minister who governed the state was at a religious ceremony at Ayodhya and He was brazen enough to tweet about it. But, there have been no murmurs from the police on this violation of the PM’s call while performing Lathi-charge to a Common Man which clearly shows that Sometimes, Police is used as a political instrument.
Efforts to curb police brutality and custodial violence: Police reforms have always been a “red herring” for the policymakers. Some of the Efforts to curb the police brutality and custodial violence’s are as followed:
1. National Police Commission Reports
The National Police Commission prepared eight reports between 1979 and 1981 and recommended several Police reforms which are as follows:-
2. Various Committees Recommendations
After the failure of the NPC, several Committees were established for police reforms. Some of them are as:
Riberio Committee (1998), Padhmanabhaiah Committee (2000), Malimath Committee (2003)
The main aim of all these committees was to make police more accountable, efficient, and reforming the system of policing so that political influence over police can be minimized.
3. Expert’s Committee Draft
The Ministry of Home Affairs set up an Expert Committee to draft a new Model Police Act in September 2005 as per the recommendations of one of the Review Committee to replace the Police Act, 1861. The Committee submitted a model Police Act on 30th October 2006.
Some of the salient features of the Model Police Act are:-
4. Law Commission’s Reports
Law commission prepared several reports where it tried to suggest ways to reduce police brutality.
Some of them are as:-
5. Supreme Court’s Directions
In the landmark judgment of Prakash Singh v. Union of India 2006 8 SCC 1, the Supreme Court provided six directives for police reforms which are as follows:
Why It Did Not Work Well?
Since, “Police” as a State subject in the seventh schedule to the Constitution of India, the State Governments have to implement the various police reforms measures. The Centre has been making the no. of consistent efforts to persuade the States from time to time to bring the reforms in the Police administration to meet the expectations of the people. Various recommendations of the Committees/Commissions were sent to the State Governments/UT Administrations for taking necessary action but the rest depends on the state governments.
Solutions to Curb Police Brutality and Custodial Violence
Several other steps have to be taken for Police Reforms, Some of them are as: