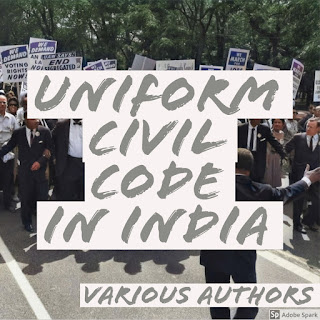 [Views of Nishtha Gupta]
The Supreme Court of India has recently rebuked the government for not coming up with the framework to bring about a Uniform Civil Code in the country. The court has voiced itself with the reasoning that despite the years that have passed since the framing of the Constitution the government has not brought about solid steps to implement the directive principles in the supreme law of the country.
Uniform Civil Code
The uniform civil code refers to a common code for all the citizens governing their lives without any reference to their religion. India has people belonging to all religions. They have their personal laws governing each religion. These laws are different and they create a disparity in terms of the application of the law when there is a conflict in their personal laws.
The Constitution of India through Article 44 enumerates that “The State shall endeavor to secure for the citizens a uniform civil code throughout the territory of India”. This is a directive principle and the state is not bound to implement these. They present guiding principles when the states frame laws for the citizens.
The Dispute for the Code
India is a land of various cultures and religions. People have their set of laws that govern personal matters in their religion like marriage and property and divorce. These bring about a disparity when the laws are different and a case in respect of these matters is brought before the court. The courts are faced with difficulty in pronouncing judgments since the personal laws are not codified and there are no fixed set of rules that can be relied upon. This is when the courts have to rely upon the previous judgments and the practices of the religion. The dispute and the arguments have since then come up before the court to bring about a uniform civil code in the country. This will ensure that laws are applied equally to all religions and there is clarity on the personal matters that come before the court.
The supreme court had put to rest partially these disputes when it was pronouncing the Shah Bano judgment. It had made it clear that the need for Uniform Code was necessary to give equal rights to all genders and religions. A woman from the Muslim religion cannot be denied her right to maintenance since her personal law does not mention it. There is a need to form a uniform code that would govern all citizens alike in these laws. This is faced with criticism for the reason that India is secular and having a common law that does not accommodate religion would be contrary to secularism. This statement can be put to rest since the framers of the constitution were aware of this fact. The uniform code does not mean doing away with religion. It is keeping a distance from religion without discriminating between citizens. This is the code that gives equal rights to all the citizens without discriminating on the basis of religion which is in consonance with secularism. Goa as a state has implemented the uniform civil code for its people. This has been a prime example of introducing it to the people in the country.
India is not ready to bring about a secular code that would not consider laws of religion. People consider interference with personal laws as interference with religion. The maturity to deal with this code would not be present in the current people. It would lead to implementation difficulties and framing would be faced with people’s opposition. It would be wise to bring about minute changes in the laws for people to realize that the laws aim to treat them equally for their interests.
Suggestions
India is a country with various religions and beliefs. People have been following it for years. It would be difficult to get people to accept this code. What India needs is a codification of laws as the first step that pertaining to religion. This would give the courts a fixed rule that they can apply for cases. When this is completed there needs to be a compilation of the beneficial aspects from all religions and their compilation for all should get equal rights in their interests. What India needs is not a uniform code rather a common civil code which is a code that would apply commonly to people belonging to a particular sector religion. It would ensure equality for people belonging to a group.
Conclusion
India as a country has to be given time to mature and for its people to accept a code like the Uniform Civil Code. People have to be brought into confidence and they should be able to believe that the code will work for the benefit of all. Their opinions and religious values have to be taken into consideration. This does not imply the government taking into opinion the voices of when it wants to bring about beneficial legislation. The courts are to understand that for a sensitive and personal area as a Uniform Civil Code it is in the interest of the country to take into account the voices of the people. What it can do at the rudimentary level is to bring about a common civil code for the people rather than a direct step towards the Uniform Civil Code.
[Views of Falgu Mukati]

Article 44 of Directive Principle of State Policy states that, “State shall endeavour to provide for its citizens a Uniform Civil Code (UCC) throughout the territory of India.”

India gained independence on 15th August, 1947. However today even after 72 years of independence no laws have been made by the Parliament in order to implement Article 44 of Directive Principle of State Policy. Time and again the Supreme Court of India has given a call to the Parliament to make laws for Uniform Civil Code. The Hindu Code Bill is a set laws, which was passed in 1950. It aimed at codifying various Hindu Laws such as Hindu Marriage Act, Hindu Succession Act, Hindu Minority and Guardianship Act, Hindu Adoption and Maintenance Act.
India is a diverse as well as a secular country. It means that all religions in India get due respect and protection from the government. One will find people practicing different religion such as Hinduism, Islam, Sikhism, Christianity, Zoroastrianism, Buddhism, and Judaism in India. All the religions have their own personal laws on matters such Marriage, Adoption, Maintenance, Divorce. Different personal laws for different religions is a major obstacle to national integration of our country.
The first case which sparked the need of a Uniform Civil Code was of Shah Bano Begum. Shah Bano Begum was married to Mohd Ahmad Khan. Shah Bano filed a petition under Section 125 of Criminal Procedure Code, demanding maintenance for herself from her husband. Shah Bano’s claim of maintenance was against The Muslim Personal Law (Shariat) Application Act, 1937. The main question before the court in this case was that whether Section 125 is applicable to Muslim Women as well. The Supreme Court increased the amount of maintenance that was decided by the High Court. However, the then government led by Rajiv Gandhi passed the Muslim Women (Protection on Divorce Act), 1986, as a result of the protests and riots by the All India Muslim Personal Law Board. This law declared the Supreme Courts verdict in Shah Bano Case null and void.
The case of Sarla Mudgal was another landmark case which highlighted that it was about time that Uniform Civil Code be implemented in India. In this case Sarla Mudgal’s husband converted to Islam and thereby solemnized a second marriage. Thus, two questions arose in this case, Firstly, Whether a Hindu husband, married under Hindu Law, could solemnize second marriage by converting to Islam. Secondly, Whether such a marriage wherein the first marriage is not dissolved would be valid considering the fact that the first wife is yet a Hindu. The Supreme Court thus concluded that the second marriage was void and that that the husband was guilty under Section 494 of Indian Penal Code.
In John Vallamattom v. Union of India, a priest from Kerala filed a writ petition. Section 118 of the Indian Succession Act is discriminatory against Christians. According to this Act the Christians had to donate their property for religious or charitable purpose by will. John Vallamattom was criticized it. Thus, this Act violates Articles 14, 15, 25 and 26 of the Indian Constitution.
There are many more such cases which portray the need for the implementation of a Uniform Civil Code. Goa is a shining example of Uniform Civil Code. In Goa there are set of laws which are applicable to all the citizens residing in Goa irrespective of their religion. Thus, in Goa polygamy is a prohibited even for Muslims. According to the different personal laws prevalent in India Hindus can adopt children under The Hindu Minority and Guardianship Act, 1956, whereas adoption is not permitted by Parsi, Christians and Muslims. Adopting of children is a personal choice and cannot be restricted in the name of religion. Adoption is a boon for women who may not be able to conceive.
Recently, The Muslim Women (Protection of Rights on Marriage) Bill, 2019 was passed which made triple talaq illegal and void. This Act states that if a Muslim husband pronounces instant and irrevocable divorce to his wife then he will be punished for up to three years of imprisonment and a fine. The passing of The Muslim Women (Protection of Rights on Marriage) Bill, 2019 is a step towards the implementation of a Uniform Civil Code, although yet many areas require attention with regard to Uniform Civil Code.
The then Chief Justice of India YV Chandrachud had once said that, “Article 44 of our Constitution has remained a dead letter.” When we look back at the Supreme Court judgements wherein the Supreme Court has delivered judgements in favour of Uniform Civil Code, we can see that the judgements have not been accepted by the people and have taken the decisions as violative of their Right to Freedom of Religion. People feel that if a common set of laws known as the Uniform Civil Code is implemented then it will violate their religious beliefs, thoughts, customs and traditions.
Implementation of a common set of laws known as the Uniform Civil Code is necessary for the National Integration of our country. Also, the implementation of a Uniform Civil Code will eliminate Religious Discrimination. The personal laws have been used as a method to oppress women since ages. Uniform Civil Code will render justice and equality to women.