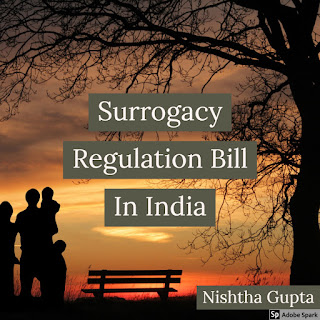 The Lok Sabha recently passed an amendment to the surrogacy rules in India as they apply to the country. The practice of commercial surrogacy was banned by this amendment in order to prevent the practice from exploiting the poor women who could not afford surrogacy.

Surrogacy refers to an arrangement where woman agrees to give birth to a child of another couple who is incapable of giving birth due to some reason. This practice ensures that the couples who cannot bear a child and women who are unable to carry the child to term are given the opportunity to pleasure themselves with the experience of raising a child. The practice of gestational surrogacy practice allows the child to be genetically related to both the mother who contributed the egg and father who contributed the sperm. The embryo is artificially planted into the surrogate mother’s womb who gives birth to the child.

India had legalised the practice of commercial surrogacy in 2002 and has been outlawed by the current government through this bill. The provisions to be highlighted are; the ban of commercial surrogacy and the registration of surrogacy clinics. The rules have been laid on the qualifications of the surrogate and the couples who can opt for surrogacy. These provisions have been laid in order to ensure that the couples are not exploited by the commercial ‘lend a womb industry’.
This is an appreciable move by the government however there are certain deficiencies. The word used by the legislators is close relative who can lend a womb. It is not defined who a close relative is. Can a close relative be an immediate family member? Can the close relative be a friend who the person considers a part of the family? These questions are left unanswered by the government. A point of pertinence on the same issue is whether a third person who may not be close relative has no right to lend her womb. In a country where women are still ostracised when they cannot give birth to child and who have to resort to this practice to give the family a child will it be practical to make such a provision.

Will the close relatives want to get involved in a matter they would consider a taboo? Conversely will a woman be comfortable in taking the services of her close relatives to give birth to a child that is hers. The bill has not made any provision for the couples who belong to the same sex and those who have chosen live in relationships. Individual women who want to bear a child are not covered by the law makers. It is a question that the government is to answer. The categories of people excluded have an equal right of experiencing the joy of having a child. This can be made possible if the government allows surrogacy for these people.

Making a sexual choice is a personal discretion and the government cannot exclude the people from having a child based on their marital status. There may be valid justifications of protecting the interests of the unborn child in certain cases however these can be taken care of through other regulations. The government can for instance ensure that the child is given a legitimate status in society. His interests should be protected in terms of successional and hereditary rights. The society should be prevented from excluding such children through government legitimisation. Giving rights to an individual rather than taking them away through such legislations is balance the government is to make.

While on one hand the same government has passed the transgender protection of rights this same government is making such a provision in a law that comes after it. While the country is making progress in moving ahead of the stereotypes the country is passing laws that are not giving effect to the intentions. The legislators have banned commercial surrogacy which means that the surrogates will be not be entitled to expenses other than the medical expenses. Altruistic surrogacy has been made absolute. This is rather questionable because for a woman who is lending her womb for the term of the child it seems rather unjust that she should not be entitled to monetary payment by the couple. This is not to construe the whole relationship as a business transaction rather a relationship where the surrogate is entitled to benefit by the couple she is garnering the life of. The legislators have a valid reason to ban the commercial surrogacy on account of its exploitation and exclusion by the surrogates. However, the other side cannot be left unheard of.
The act of lending a womb and holding a child of another person is an act of altruism in itself. It gives the opportunity to an infertile couple to have a child. This requires that the person giving them this opportunity is rewarded. Moreover, the lending of womb is a business opportunity for women who have managed to fill the stomachs of their families by engaging in this business. It should not be forgotten that child birth is a painful procedure and for a person who is going through this it is the minimum requirement that they should be given monetary benefits when no other form of compensation for expression of gratitude is possible. This relates to an aspect of the legislation that allows only women who do not have a child of their own to lend their womb.

A reasonable solution that could have been opted by the government to balance the interests of the couple and the surrogate is by setting a minimum requirement that the couples have to pay depending on their wealth status. For the couples who are indigent and economically not capable of paying the government can exempt them from paying while paying from its fund reserved for this purpose. For couples who wish to pay more should be left open with the option of paying the surrogate. The argument of exploitation arises when there is no central mechanism to deal with the scenario and the person doing a favour is in dominating position.

When the business is made salaried and accountable to the government there will be reduction in the exploitation for the limit is set by the authority implementing the law. In order to protect the health of the surrogate from the conceiving of multiple children this could have been taken care of if the surrogate obtained a medical certificate from a registered medical practitioner to conceive another child.

It is said that if you have the capacity to make the world happy do that since the world needs more of that. A surrogate is giving the foremost happiness to a couple by giving birth to their child. She needs to be given certain level of benefit for this. Similarly, the couples irrespective of the marital status and individual women need to be given an opportunity to bear a child through a surrogate. This is the natural right of every person and the government should consider them before making inexperienced laws.