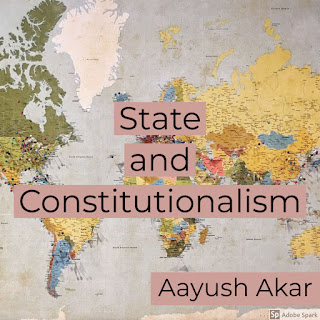 As mentioned in Article 21 of the Indian Constitution that “no person shall be deprived of his life or personal liberty except according to a procedure established by law” . It means that a person can be deprived of the life of the procedure established by law made by the state. So the question arises what is a state where the definition is given Article 12 of the Indian Constitution.

Article 12 of the Indian Constitution states that, “definition in this part, unless the context otherwise requires, the State includes the Government and Parliament of India and the Government and the Legislature of each of the States and all local or other authorities within the territory of India or under the control of the Government of India” . As mentioned in Article 13 states that state shall not make any laws which take away the fundamental rights of the citizens. It means citizens can protect their fundamental rights from the state.
In order to make sure that the state is not exhaustive in nature and can allow other authorities to ask rights from them, Article 12 is inclusive in nature and has the word other authorities. There is a vertical relationship between other authorities with the state.
Changing Nature of Definition of State
In order to assess the limits of Article 12, it will be important to go through the Debates of the Constituent Assembly (CAD) as to what functions the state should perform.  In his speech on November 29, 1948, in reaction to Dr. Kamath, Dr. Ambedkar clearly specified that they had to have a broader connotation of the phraseology of government. Many of the Constituent Assembly leaders, however, are doubtful about Dr. Ambedkar’s strategy. Mr. Naziruddin Ahmad, who was not persuaded by this approach, was one such founding member. Mr. Ahmad challenged the concept of expanding the scope of government to include taluka and local boards in his speech on 9 November 1948. Only one government could exist for him, one with sovereign power and he mentioned that even if the body performs no function, it would also be regarded as the state.
Mr. Ahmad’s and Dr. Ambedkar’s methods reflect two ways of seeing the state; academically referred to as structuralist and functionalist.  The structuralist searches for the state structure within an entity or institution to declare it a state, whereas the functionalist looks at the core function; if the role is a state function, it would fall within the definition of Article 12.  There is a transition of nature of the state by the Apex Court from structuralism to functionalism.
In initial years it was inclined towards a structural approach. In the case of Rajasthan State Electricity Board v. Mohan Lal , Justice Bhargava argued that, in order to declare a particular body a state, that body must be created by a statute and must have the power to punish. Two criteria can be seen from the above analysis:

He rejected the principle of ejusdem generis or things of like nature which were evolved in the case of the University of Madras v. Santa Bai. Nevertheless, by the 1980s, when Justice KK Mathew’s concurrent opinion in Sukhdev Singh v. Bhagatram  brought in a new dimension, this approach slowly diminished. Instead of stressing the criteria set out in RSEB, Justice Mathew focused on the body’s functions. His view opened the doors to the functionalist; so rather than looking at the structure, the focus turned to a body’s function. Therefore, if a body discharged a high public value function, it could be a state for Justice Mathew.

The Supreme Court held in the case of Som Prakash v. Union of India that a government corporation (Bharat Petroleum Corporation) falls within the meaning of the term the Government used in Article 12. As per Justice V Krishnaiyer, the word other authorities will include all constitutional or legislative bodies that are given powers to promote economic activities. Not only is it confined to statutory corporations, but it can also include a government company, a registered company, or bodies that have some connection with the government. Nevertheless, the breakthrough came with R.D. Shetty v. India’s Airport Authority which gave us the 5 criteria as advocated by Justice P.N Bhagwati. This is a test to determine if an entity is a state agency or instrumentality, which goes as follows:

In Ajay Hasia v. Khalid Mujib Sehravardi, it has been held that whether a statutory body falling within the purview of the term other authorities is to be considered differently. In this case, Justice Mathew’s opinion became the majority opinion. It evolved the concept of the juristic veil which means that the state is working behind the instrument or organization.  In the opinion of the minority, the tests set out, in this case, are relevant only for the purpose of determining whether an entity is an instrument or an agency of the State. By 2005, however, the criteria were changed again by the Zee Telefilms v. Union of India, in which the Supreme Court adhered to the Pradeep Kumar Biswas v. Indian Institute of Chemical Biology ruling and set out three criteria for determining a state:

Whether Judiciary is a Part of State?

The judiciary is not expressly mentioned in Article 12 and there are a large number of dissenting views on the same subject. Bringing the judiciary completely in line with Article 12 causes a lot of ambiguity as it comes with an attached presumption that the very protector of our fundamental rights is capable of violating them.
In Rupa Ashok Hurra v. Ashok Hurra , the Apex Court reaffirmed and ruled that no judicial action could be said to violate any of the Fundamental rights and that it is a settled position of law that superior courts of justice did not fall within the ambit of state or other authorities under Article 12. It leaves with us with the reasoning that a Superior Judicial body when acting Judicially would not come under the concept of State but when it conducts some administrative or related functions e.g. performing investigation, it will fall under the definition of state and that remedy could be pursued in that sense only in case of violation of fundamental rights.
Conclusion
It is known that there was ambiguity regarding the nature of the state from the University of Madras case until Pradeep Kumar case where finally the Apex Court gave three criteria for the definition of the state. Justice Bhargava in the University case followed the structural approach but the Justice KK Mathew followed a functional approach which means public function test which expanded the definition of Article 12. The opinion of Justice Mathew turned into the majority opinion in the case of Ajay Hasia. According to Article 12 of the Constitution, the term of State does not specifically refer to the judiciary. Therefore, a substantial amount of controversy surrounds its status in relation to Part III of the Constitution.