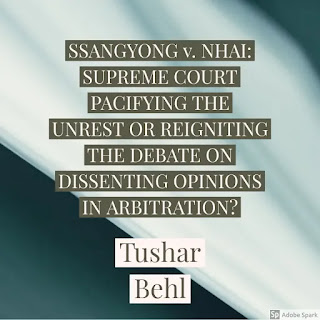 In a noteworthy decision of the Supreme Court of India (‘SC’) in Ssangyong Engineering & Construction Co. Ltd. v. National Highways Authority of India [1], while interpreting the Arbitration and Conciliation Act, 1996 (‘The Act’), The Apex Court without giving comprehensive reasoning, adopted an unusual approach towards recognition of dissenting opinions by setting aside a majority decision.
Recapitulating the Basic Rules Governing a Tribunal’s Decision
While adjudicating arbitration disputes, the Arbitral Tribunal (‘Tribunal’) can face a dilemma that majority cannot be attained to a unanimous decision, but nevertheless, the Tribunal is beholden to the established provisions of the Act, which oversee its conduct and stand in need of a ‘majority’ in all cases. One such consequence is always expected that the majority be never attained, giving rise to a state of hibernation where one of the arbitrators has already dissented from the award. However, the Act coupled with the UNCITRAL Rules, makes it quite clear where more than one arbitrator is appointed, the majority’s opinion will be validated and subsequently, upheld. Section 31(2), thus enunciates:
“For the purposes of subsection (1), in arbitral proceedings with more than one arbitrator, the signatures of the majority of all the members of the arbitral tribunal shall be sufficient so long as the reason for any omitted signature is stated”.
At the outset, it is quite evident from a kind perusal to the Act and the UNCITRAL Rules, that even if an opinion by the minority sounds more captivating and legally sound, an enforceable award would be the one, which has undergone the rule of majority voting and signature.
Supreme Court’s Finding on ‘Minority Opinions’
In Ssangyong, the SC while adjudicating the arbitral award under challenge, set aside the judgments of the single judge and the division bench of the Delhi High Court. Moreover, in the exercise of its plenary power under Article 142 of the Constitution of India and by-passing the statutory restrictions, the Apex Court without much deliberation upheld the minority decision of the arbitral tribunal while setting aside the majority view.
It is pertinent to note that the ‘inherent power’ conferred to the Apex Court under Article 142 is ‘significantly restrictive’ in the sense that even if SC is left with uncatalogued powers, it cannot inordinately interfere with statutory provisions with an endeavor to do ‘complete justice’. Therefore, the Court must strike a balance between both.
The Court’s decision on upholding the minority findings raises peculiar issues. As propounded by the Court, usually in such circumstances and in consonance with the scheme of the Act, the majority findings are referred afresh to another arbitration. Moreover, initiating fresh arbitral proceedings would cause a substantial delay and contradict the very purpose of the 1996 Act, which is to expeditiously resolve the disputes by way of an arbitral process.
Previous decisions also indicate a similar approach adopted by the Courts where minority decisions have been upheld while adjudicating on a request for setting aside arbitral awards under challenge. In Modi Entertainment v. Prasar Bharati [4] and ONGC Ltd v. Interocean Shipping (India) Pvt. Ltd. [5], Courts while setting aside the majority award, tried to place both, the minority as well as the majority award on equal footing. However, this circumvention was possible only because the arbitral tribunals overstepped the statutory limitations as envisaged under Section 34 of the Act.
Scope of Remedy available to Parties in Consideration to the Ethos of Section 34
The position of law as delivered by the Apex Court in Ssangyong is so that an award which is set aside by the Tribunal, has to be ‘referred afresh’ to another arbitration. In other words, the award set aside must be relocated to a newly constituted Tribunal for fresh consideration.
However, the contours of a Section 34 application does not permit the correction of an arbitral award. The grounds mentioned, restrict judicial intervention to a good extent as upheld by the SC in McDermott International Inc. v. Burn Standards CO. Ltd. [6] which deliberated on the fact that a Tribunal cannot modify and only annul the award to meet the ends of justice. Therefore, it is quite understandable that the supervisory role of the court is limited to setting aside or quashing the award and by no means, the Court can substitute its opinion over that of the majority in order to uphold the opinion of minority members. This approach also stands erratic with the Apex Court’s decision in Ssangyong.
Conclusion
The Ssangyong decision, although prevents the erosion of ‘party autonomy’, and recognizes the factually and legally sound opinions of the minority members of the arbitral tribunal, in doing so, it has failed to throw light on the ambit of an ‘award’ and whether an enforceable award actually constitutes the minority opinions of the Tribunal. It follows from the above decision that as per Section 31(2) of the Act, only a signed majority award can be treated as an award is capable of enforcement. This decision raises more ambiguity while contradicting the established provisions of the Act where there is no tussle.
Moreover, the Apex Court has crossed the wide language of Article 142 while exercising its plenary power since the directions of the Court appear to be inconsistent with specific provisions of the Act. This would further lead the parties to approach the SC anytime when minority opinions are left in the case file.
Hence, it is of crucial importance, that certain amendments be brought to the Act in order to fill this empty vacuum.
References
[1] Ssangyong Engineering & Construction Co. Ltd. v. National Highways Authority of India, 2019 SCC SC 677.
[2] United Nations Commission on International Trade Law, UNCITRAL Arbitration Rules (as revised in 2010).
[3] The Arbitration and Conciliation Act, 1996.
[4] Modi Entertainment Pvt. Ltd. v. Prasar Bharati, 2017 SCC Del 7509.
[5] ONGC Ltd. v. Interocean Shipping (India) Pvt. Ltd., Arbitration Petition 549/2013, decided on March 17, 2017.
[6] McDermott International Inc. v. Burn Standards Co. Ltd., (2006) 11 SCC 222.
[7] A.R. Antulay v. R.S. Nayak, (1988) 2 SCC 602.