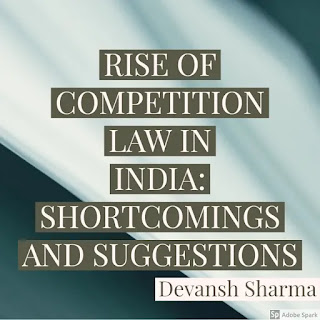 “There is no established jurisprudence on most substantive issues. Any legal regime this young must be considered a work in progress that requires more work to complete.”
Indian Competition law is of a very contemporary origin when compared to its contemporaries. The delay can be attributed to the reluctance of the Indian populace and political leaders towards a market-based economy.
Statutory laws
The first Indian competition law statute, the Monopolies, and Restrictive Trade Practices Act of 1969 was replaced by the Competition Act, 2002. This statute aims at prohibiting “any agreement which causes or is likely to cause an appreciable adverse effect (AAEC) on competition within India” [2] The act presumes certain agreements to have AAEC unless they can be shown to create efficiency gains. [3] Every other agreement is presumed to be lawful unless proven to be an AAEC. The abuse of a dominant position in an agreement is also a ground for unlawfulness. [4]
Certain provisions of the CA deal with mergers and acquisitions. [5] The large companies are legally obliged to notify the government before merging or acquiring other firms. Mergers and acquisitions that have AAEC are unlawful.
CA authorizes the government to enact certain rules in order to implement the act, [6] and the government has already issued several procedural and substantial rules.
Institutions
In the Indian context, there are five institutions that play a major role in the implementation of competition law. These are:

There are several gaps in the Competitive law regime in India. It can be attributed to the recent origin of the system. The institutions are so recent in origin that most of their features have not been properly used in practicality. India can adopt ‘take the best and leave out the rest’ approach with respect to the successful and comparatively old regimes. These include systems like the US and the EU. Indians can learn from their shortcomings, work on them and construct craft a better competitive law regime. Indian scholars and officials should aim at avoiding the mistakes the US made and use it as a basis to build a competitive law regime for India. [10]
The basic elements of the competitive law structure of India are well up to the mark. The statutes were drafted in such a way that the institutions to decide on the matters when there is any bad conduct that is producing or likely to produce bad effects. The institutions are well-constructed to meet the tasks of inquiry and adjudication. The decisions of one intuition can be challenged in another institution which ensures that justice is rendered.
The SC has issued two judgments that lay down rules applicable to CCI. In Rangi International Ltd. v. Nova Scotia Bank and Ors. [11] the court clearly held that the CCI has the responsibility to state the reasons to support its judgments. It gives the parties, the courts, and other officials an understanding as to the reasons behind decisions.
Further, in the Competition Commission of India v. Steel Authority of India Ltd. and Anr, [12] that the CCI, while deciding on a matter must complete the hearing “most expeditiously” and in a time period even shorter than mentioned in the statute. The CCI may find it extremely difficult to implement this and the SC may find it even more difficult to enforce this. This problem was faced by the US regime. The unrealistic deadlines on agency actions were unable to be met effectively. [13]
Suggestions
For India to be a better competitive e law regime, the following steps are suggested:
References
[1] Dr. K.D. Singh, Deputy Director (Law) at the Competition Commission noted at a 2015 Symposium on Competition Law sponsored by the National Law School.
[2] Competition Act, 2002 §3(1).
[3] Competition Act, 2002 §3(3).
[4] Competition Act, 2002 §4(1).
[5] Competition Act, 2002 §5 and 6.
[6] Competition Act, 2002 §64(1).
[7] Competition Act, 2002 §7-12.
[8] Competition Act, 2002 §39.
[9] Competition Act, 2002 §53.
[10] “TRANSCRIPT OF THE VIII NLSIR SYMPOSIUM ON COMPETITION LAW.” National Law School of India Review, vol. 27, no. 2, 2015, pp. 197–225. JSTOR, Available here
[11] Rangi International Ltd. v. Nova Scotia Bank and Ors. (2013) 7 SCC 160.
[12] Competition Commission of India v. Steel Authority of India Ltd. and Anr (2010) 10 SCC 744
[13] Parrillo, Nicholas R., The Endgame of Administrative Law: Governmental Disobedience and the Judicial Contempt Power (January 12, 2018). Harvard Law Review, Volume 131, Pages 685-794 (2018). Available at SSRN: Available here or here
[14] Clayton Act, 1914 §4.