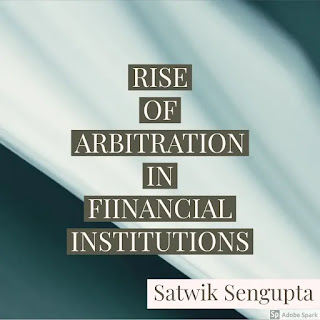 At its simplest, arbitration is an alternative to national court litigation as a means of resolving disputes; in choosing arbitration parties are opting to have their dispute resolved privately instead of going to a national court.

Key features of international arbitration which make it an attractive alternative to the procedure of regular litigation are :

Most of the financial institutions and organizations are tilting in favor of the method of arbitration as a solution for any and all disputes arising regarding the relevant contract between both parties. Arbitration in this aspect has many positive features and advantages which makes it a relatively better alternative than the tedious and lengthy procedure of national court litigation. Some being:
In totality, Arbitration is much more desired as a mode of dispute resolutions due to the aforementioned features however this doesn’t mean that such method is devoid of any problems in its own right.
The major problem of arbitration between financial organizations may arise in a situation of disputes between parties indulging in cross border dealings and partnerships. Two of the main attractions of the process of Arbitration were that they were cost-effective and less time-consuming. However, due to the dealings of financial institutions across international boundaries both these features have become a sort of discrepancy to the same. The cost has become a factor as both parties may not belong to the same country and thus may involve high costs regarding the expenditure of procedure and transportation. Time consumption is considered a negative factor as both parties and arbitrators may belong from different countries which may lead to delay in coordination between the parties and the arbitrators which may lead to slow remedies.
Opinion on the solution: Cost and time are two major factors which every person considers when undergoing the procedure of dispute resolution. Major Multinational organizations may be able to bear costs regarding such procedure but smaller organizations might not be able to do so. Also according to me, there should be a unilateral body, which should govern such procedures. Taking the International Court of Justice as an example, such a body should be present which shall act as a governing body or act as an International Arbitral tribunal, which may hear such cases between the two aggrieved parties in a cross border dispute arising between two financial organizations. If not so, there should be an establishment of a regulatory authority, which shall act as a price-determining, or controlling body that can help in the determination of a certain amount, which shall act as a core price upon which further adjustments can be made to suit both the parties.
In my personal opinion, I believe that the aforementioned methods may also help in reducing the time period of the whole procedure and remove the hindrance of delays in the procedure so that the procedure of arbitration can become a perfect solution for both parties indulging in such method of dispute resolution. If both of these problems are solved and dealt with accordingly, then the process of arbitration amidst financial organizations may become much smoother.
Essentially, in conclusion, it can be said that Arbitration is creating its own position in the field of financial institutions even though there are certain hurdles and disadvantages that need to be overcome. It is being recognized as a more convenient, secure and private form of dispute resolution pertaining to financial topics. The advantages are subsequently much more superseding to the disadvantages of the procedure. If the minor hindrances, which have been mentioned above, are dealt with accordingly, then it may become the perfect solution regarding any financial dispute. Anyhow there is a lot of potential in the procedure of arbitration and thus the preference of such arbitration is increasing manifold.