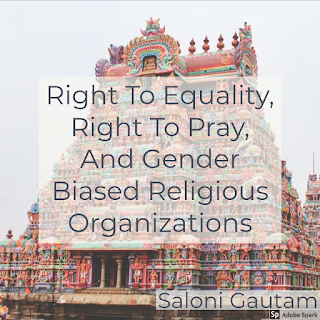 India is a unique blend of different religions in one country living with harmony among them. India also has the longest written constitution in the world guaranteeing the rights as well as defining the duties of the citizens, establishing a democratic government system which will work for the people and will be functioning by the people. Indian constitution has given various rights to its citizens and the government is bound to respect these rights which are also known as fundamental rights of the citizens.

1 thought on “RIGHT TO EQUALITY, RIGHT TO PRAY, AND GENDER BIAS RELIGIOUS ORGANIZATIONS”