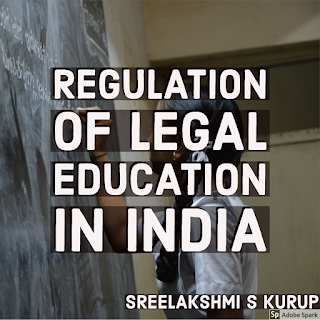 There are several institutional mechanisms which regulate legal education in India. The major regulatory bodies are discussed here.

Bar Council of India
The reformation in Indian legal education was spearheaded in the landmark case of Bar Council of India v. Bonnie FOI. In this case, the Honourable Supreme Court of India identified the low standards of legal education and constituted a judicial committee to address the issue. The committee consisted of Mr. Gopal Subramanium, Mr. S.N.P Sinha (both former Chairman of the Bar Council of India) along with  Shri M.N. Krishnamani (former President of the Supreme Court Bar Association). Mr. Subramanium was appointed the Chairman of the Commission.
University Grants Commission (UGC)
The University Grants Commission was formally established on November 1956. It is a statutory body of the Government of India through an Act enacted by the Parliament. It is aimed for “coordination, determination, and maintenance of standards of university education in India.” Additionally, in order to provide quality region-wise coverage throughout India, UGC has established regional offices in Hyderabad, Bhopal, Kolkata, Pune, Bangalore, and Guwahati. Its head office is located at Bahadur Shah Zafar Marg in New Delhi. Apart from its head office, there are “two additional bureaus operating from 35, Feroze Shah Road and the South Campus of University of Delhi as well”.
The University Grants Commission is governed by the University Grants Commission Act of 1956. It consists of detailed rules and regulations regarding several aspects of a university such inspection rules, the fitness of universities, the fitness of institutions for grants, minimum pre-requisites for the appointment of teachers in universities and colleges, and so on.  There is a constant novation of rules and guidelines framed by the UGC, some of which shall be discussed in the latter half of this chapter.
A clear idea of the significance of the UGC can be inferred from their mandate.
The National Knowledge Commission
The National Knowledge Commission (NKC) was established on 13th June 2005 with the aim of transforming India into a knowledge society. It was constituted as a high-level advisory body to the Prime Minister of India. It was a major initiative when Dr. Manmohan Singh was the Prime Minister of India. He said, “The time has come to create a second wave of institution building and of excellence in the field of education, research and capability building so that we are better prepared for the 21st century.”
Similarly, the key objectives of the Commission were as mentioned below:

The National Assessment and Accreditation Council, or ‘NAAC’ were created in 1994. It functions as an ‘autonomous institution of the University Grants Commission UGC with its Head Quarter in Bengaluru’. It comprises of a General Council (GC) and Executive Council (EC). It includes “educational administrators, policymakers and senior academicians from a cross-section of Indian higher education system.” Also, “[t]he Chairperson of the UGC is the President of the GC of the NAAC, the Chairperson of the EC is an eminent academician nominated by the President of GC (NAAC). The Director is the academic and administrative head of NAAC and is the member-secretary of both the GC and the EC. In addition to the statutory bodies that steer its policies and core staff to support its activities NAAC is advised by the advisory and consultative committees constituted from time to time.”
The main role of NAAC is to conduct assessment and accreditation of Higher Education Institutions or HEIs. It is a tool to understand the ‘Quality Status’ of an institution. Its vision is “To make quality the defining element of higher education in India through a combination of self and external quality evaluation, promotion and sustenance initiatives.”
As a quality-checker, the key objectives of NAAC are:

The National Institutional Ranking Framework is a ranking system accepted by the MHRD. It uses several parameters to access the ranking of a university, namely, Teaching Learning & Resources; Research and Professional Practice; Graduation Outcome; Outreach & Inclusivity; and Perception.
While discussing the different regulatory bodies of Indian Legal Education and how they aim to enhance quality education in India, the Draft National Education Policy (2019) ought to be highlighted. The policy notes that “professional education in law has to be globally competitive, adopting best practices and embracing new technologies for wider access to justice and timely delivery of justice. Hence a new legal education policy is found imperative for assigning direction for future change.”
Further, the Policy also emphasizes the role of strong leadership and governance of Higher Education Institutions. It says “[a]s we move towards institutional autonomy, strong and ethical leadership, both in terms of governing bodies and leaders, becomes even more imperative. While the stability of tenure is important to ensure the development of a suitable culture, at the same time, leadership succession must be planned with care to ensure that good practices that define an institution’s processes do not end with a change in leadership. The effort must be to build strong diverse teams, comprising both academic and non-academic members. Coherent, shared plans rather than the decisions made by a few individuals, must be the basis for progress towards institutional goals.”
It could thus be safely concluded that institutional mechanisms and rules play an active role in regulating legal education in India. Such regulations and governance systems ought to be in place to ensure that quality legal education is imparted to law students across the country.