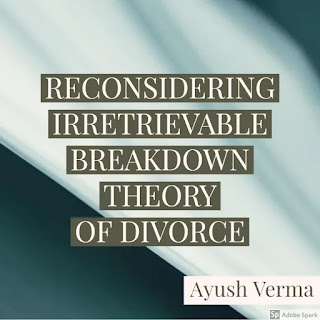 Under S. 13 of the Hindu Marriage Act 1955 or S. 27 of the Special Marriage Act 1954, spouses are given the right to obtain a divorce if any of the grounds listed in the above sections are found to be valid. However, the grounds mentioned therein are based on the fault theory, which suggests that either of the party should have committed a fault for the other party to obtain a divorce. Though the no-fault theory has come into force after the Marriage Laws (Amendment) Act of 1976 which provides for divorce by mutual consent, there is no provision to obtain a divorce where one party is not willing to live with the other party. This leads to frustration among the parties due to which the unwilling party resorts to infidelity in order to procure a divorce. Thus, the Hindu Marriage Act 1955 has proved to be a failure and a social reform is imperative in the field. [1]
There is an urgent need to address this problem to protect the sanctity of marriage, and hence, the irretrievable breakdown should be included as a separate ground for obtaining a divorce in the marriage laws. The irretrievable breakdown theory supports the fact that marriage is not an indissoluble union and it is better to get separated than to live unhappily. This theory allows spouses, or even one spouse to take a divorce without any fault or offence. The Law Commission of India in its 71st report has also recommended to include irretrievable breakdown theory as a separate ground of divorce. Also, the Courts in many cases have come to the conclusion that husband or wife cannot be forced to live with each other. In the case of Ram Kali v. Gopal Das [2], Delhi High Court observed that it would be unreasonable and inhumane to compel the parties to keep up the facade of marriage where there are no prospects of their living together like husband and wife. The Law Commission Report also emphasized that once it is known that there is no possibility of the success of the marriage, to drag the legal tie amounts to cruelty and gives rise to crime. [3]
Present Position Of The ‘irretrievable Breakdown Theory’
Once the marriage has come to a point that it cannot be fixed, it would be harmful to the parties if the Court compels them to live together, and would only give rise to domestic violence and infidelity. Nothing can be gained by trying to keep the parties tied when they have decided not to co-operate. It would only worsen the situation and parties who were seeking the relief would be affected the most.
There have been many judicial pronouncements supporting the view that an irretrievably broken down marriage shall be dissolved. In the case of Kanchan Devi v. Pramod Kumar Mittal [4], Supreme Court while exercising its power under Art. 142 dissolved the marriage which has broken down irretrievably. The Supreme Court further held that where facts and circumstances of the case show that the marriage between appellant and respondent as irretrievably broken down and where there is no likelihood of rapprochement, it has the power to dissolve that marriage by exercising jurisdiction under Art. 142.
Similarly, in the case of Naveen Kohli v. Neetu Kohli [5], the Supreme Court strongly recommended that the theory of irretrievable breakdown should be incorporated as a separate ground of divorce in S. 13 of the Hindu Marriage Act 1955.
The Court observed that the respondent-wife has made the life of the appellant-husband a hell by treating the husband with mental cruelty, and the marriage between them has broken down to the extent that their chances of living together happily have completely disappeared. The Court was also of the view that denying a divorce in such a situation would only encourage continuous bickering, perpetual bitterness and may lead to immortality.
In the above cases, it can be seen that the Supreme Court has extraordinary powers under Article 142 to grant a divorce where a marriage has broken down irretrievably. However, such powers are not available to the Civil Courts or the High Courts as was observed by the Supreme Court in the case of Anil Kumar Jain v. Maya Jain. [6]
Therefore, it can fairly be surmised that the Apex Court of India has recognised the need for bringing irretrievable breakdown as a ground for divorce and has exercised its power to give relief to the parties by using the said ground, whenever it felt the need to do so.
Safeguards To Be Adopted
While including the irretrievable breakdown theory as a ground for divorce, certain safeguards need to be adopted considering the sanctity of the marriage. If there is a chance of preserving marriage, then it is ought to be preserved.  Also, enough care should be taken to protect the interests of both parties. There might be a situation where parties having children are coming for divorce, in that situation, Courts shall have to take extra care as children are the ones who are most affected due to the separation. The law commission suggested some safeguards to protect the misuse and abuse of the ground. The safeguards were predominantly based on two things:

The report stated that while providing the divorce under this ground, the best interest of the children should be taken into account. Though the presence of children does not put an absolute bar on the ground, preventive measures should be taken considering the financial condition of the spouses.

In India, divorced women are also looked down upon and they are not even supported by their parents. They are maltreated and are considered as a bad omen. Considering all the factors, the commission has granted the Court discretion to deny the divorce decree, if it causes financial hardship to the respondent. [8]
The law commission has also laid down that the parties must be living separately for a reasonably long period in order to obtain a divorce which would prove the fact that the marriage has broken beyond reform. Divorce cannot be granted where a party has merely stated that the marriage has broken down. Adequate measures need to be taken so that the ground is not misused by the parties. So, the law commission has suggested that the separation of parties for a continuous period of three years would be fair and adequate to grant a divorce. [9]
Conclusion
In India, the laws relating to divorce are in a desperate need for reforms. One of the immediate reforms needed is in the field of divorce by the introduction of a separate ground of “irretrievable breakdown of marriage” for divorce. However, truth is, despite the recommendations of the Law Commission and the Apex Court, the law remains unaltered.
Many developed countries of the world have recognised the breakdown theory as an independent ground for divorce. Though there is no explicit mention of ‘irretrievable breakdown of marriage’ as a separate ground for divorce, Supreme Court in several cases has granted divorce taking into consideration the breakdown theory. Therefore, it is high time that the Legislature should recognise the urgency and prevent the wedlock from being a deadlock by introducing ‘irretrievable breakdown’ as a separate ground for divorce.
References
[1] 71st Law Commission of India Report, THE HINDU MARRIAGE ACT, 1955- IRRETRIEVABLE BREAKDOWN OF MARRIAGE AS A GROUND FOR DIVORCE, 5.
[2] Ram Kali v. Gopal Das, (1971) 1 ILR Delhi 10 (F.B.).
[3] Supra 1, at 2.
[4] Kanchan Devi v. Pramod Kumar Mittal, AIR 1996 SC 1515.
[5] Naveen Kohli v. Neetu Kohli, AIR 2006 SC 1675.
[6] Anil Kumar Jain v. Maya Jain, (2009) 10 SCC 415.
[7] Supra 1, at 30.
[8] Ibid, at 38.
[9] Ibid, at 29.