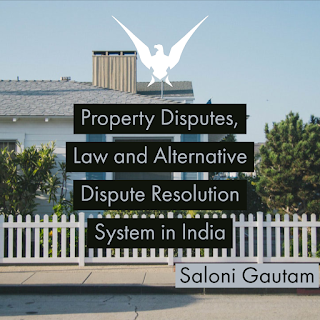 From the very ancient time since the human started being civilized there have been disputes for the ownership of property, be it any movable property or immovable property. Property can be divided into three categories as mentioned below.

There has been a considerable amount of growth in the laws governing property disputes. There are various laws which govern different types of disputes and other than approaching the court of law there are other methods as well. ADR in property matters helps a lot the Courts to settle disputes outside the court and reduce the number of cases. Now we will be discussing some laws which are governing or have ever governed the property disputes in India.

Currently, there is legislation named The Real Estate (development and regulation) Act, 2016 also known as “RERA”, it is a central legislation which aims to bring the real estate sector under its ambit thereby aligning the interests of the people who have been allotted under the plan and the promoters. It is in accordance with the entry 6 and 7 of the Concurrent List of the Constitution of India, which empowers the central government as well as the state governments to make laws on the topic. It was enacted in March 2016 and came into effect from May 2017.
As we can see that RERA is a newly made and enacted legislation then what was the scenario before 2016?
Prior to the enactment of RERA, there existed a redressal mechanism under the Consumer Protection Act, 1986, in respect of a real estate project, a consumer as defined under Section 2(d) could approach the State Consumer disputes redressal Commission or the National Consumer Dispute Redressal Commission depending on the pecuniary jurisdiction as provided under section 11 and 22 of the Consumer Protection Act, 1986. Other than this there are a series of central and state laws as given:-

The question which arises is that when there was a law providing the redressal mechanism then what was the need of implementing new legislation?
The answer to this question can be that though the Consumer Protection Act, 1986 adopted a summary procedure, there were instances wherein the consumer complaints were lingered on for a long duration completely defeating the intention of the legislature. The Consumer Protection Act, 1986 was started to be criticized at a wild level for inordinate delay in granting relief to the consumers. Transfer of Property Act, 1882 talks about some parts of transferring property, etc. but it doesn’t properly focus on the disputes and their resolution. Indian Contract Act, 1872 covers the contractual part but it is also incompetent to provide any redressing machinery for the consumers in real estate or the promoters of the real estate properties. Indian easement act mainly limits to proving licenses to freely use the property.
For the Intellectual Property – There is a different bunch of legislation which includes topics such as Trademark, Copyright, Design, Patent, and Geographical Indication. Main laws governing these are as follows:-
Trademark Act, 1999 brought a huge change in the IP laws and started to give IPRs more value than the previous legislations hence it is important to discuss this legislation. The fundamental changes done by the Trademark Act can be defined as given below:-
Although these legislations have been created long back but in modern times the most recent trend in India is about IP laws and their implementation. After the IPR Policy 2016, the government has taken some really important steps in order to make people aware of IPRs and not just to make them aware but to stop people from using or violating other people’s IPRs. As the main step towards the implementation of the plan, the government created a cell under the Ministry of Commerce and Industry, Department for Promotion of Industry and Internal Trade. The cell works for the promotion and management of Intellectual Property in all fields.
The Trend in Disputes
The trend of disputes relating to the property matters has been changed, nowadays people don’t go for a critical litigation process but they opt for the easier, faster, cheaper and more convenient mode of resolution which is known as Alternative Dispute Resolution where the people find solution for their problem and finish their dispute at a compromising stage where no party remains unsatisfied. But it doesn’t mean that all matters relating to properties are going for ADRs and there have been incidences where the parties were in a court of law and the court had to ask them to go for ADR solutions.
A brief description of a few widely used ADR procedures is as follows:
While the judicial process is largely considered fair, a large backlog of cases to be heard and frequent adjournments result in considerable delays before a case is decided. However, matters of priority and public interest are often dealt with expeditiously and interim relief is usually allowed in cases, on the merits.
The disputes relating to purchase and sale of property, ownership, rent, lease, mortgage, construction, joint development agreement falls under the category of real estate disputes which can be resolved through online dispute resolution in India. The importance and the value attached to real estate properties are of great significance. Alternative dispute resolution in India helps the parties to avoid decades of litigation in a cost-effective manner and to maintain cordial relation.
Alternative Dispute Resolution in the matters related to property be it movable property, immovable property or intellectual property aims to reduce the burden of courts at the same time they work for the parties and make the process easy and convenient for them, in less time and money it aims to resolve the issue and leads both the parties to a compromise where both parties agree to settle the dispute.

References
[This Article was provided by Lexio Solutions. Visit them at www.lexiosolutions.ml]