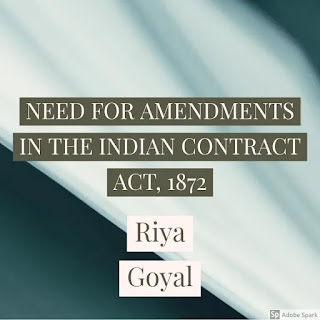 The Indian Contract Act, 1872 is one of the oldest legislations in India. This act governs the contractual relationship between two or more parties, which may be individuals, firms, or the government. This act defines and covers all the aspects which may be involved in the formation and implementation of a contract including (but not limited to) formation, capacity, validity, performance, discharge, bailment and pledge, agency, as well as the remedies in case of a breach. All these topics have been covered in vast detail.
With the expansion of businesses across the globe as well as within the county due to globalization and access to technology, the relevance, and importance of this act are only increasing. With more people entering into new kinds of contracts and the change in the business environment, the need for an amendment to the article has been sought and to get it in accord, so as to protect the interest of the parties entering into contractual relationships.
Issue
Although this Act is considered to be quite exhaustive, there are some areas in which a need for amendments is seen.
The first area in which we could seek an amendment is the provision governing online contracts. With the growing use of technology, we witness that more and more people are using electronic means to enter into contracts. Up until now, we see that the general terms of the Act are being applied when it comes to online contracts. We need a separate provision that would ensure clarity in terms of the conditions for validity of a contract, their jurisdiction, agreements, etc.
Secondly, provision to ensure the contractual liability of minors. The current position of India in accordance with Section 33 of the Specific Relief Act, 1963, in terms of the contractual liability of the minors in case of fraudulent misrepresentation can be understood as:
This gives rise in loopholes which can be exercised by the minors in order to escape liability and the Indian Contract Act in itself doesn’t contain any specific provisions relating to his.
Lastly, the need for regulations regarding the unfair terms of a contract. We see, in the Indian Contract Act, that when the essentials of a valid contract are listed, the presence of consideration is required, however, there is no principle mention which would justify the fairness of a consideration.
Law Perspective
In the landmark judgment for Mohiri Bibee v. Dharmodas Ghose, the application of Article 65 of the Indian Contract Act, 1872 was challenged, the Privy Court waived it off saying that this contention was only applicable to any agreement or contracts between competent parties, and has no application to a case in which there never was, and never could have been any contract. However, the Law Commission in its 13th report in said that they believe an incorrect interpretation had been passed by the Privy Council and recommended that an explanation to be added where a minor enters into an agreement on the false representation that he is a major, even though action on this hasn’t been taken yet.
Similarly, The Law Commission, in its 103rd report on unfair terms in the contract, which was published in 1984 has addressed the matter of unfair terms, a decision on which is pending.
Writer’s Perspective
I believe that with the growing use of technology, and entering into e-contracts, it would be only logical if we had legislation specifically for that matter so as to ensure that no party gets manipulated at the hands of another and the law doesn’t get blind-sided. It is only if the law recognizes this change in ways of entering into a contract and adapts itself to the dynamic environment that we ensure equal rights for everyone.
Secondly, when it comes to liability of minors, the wrongdoer must be punished for the crimes that he has done regardless of the age bar that he falls under, just being a minor doesn’t hold off as a valid reason to not make him liable for his acts. The minor should know that there is a cost behind the task that he is giving into and he would be held liable to pay the compensation in case it falls through. If there is no fear in the eyes of the minor with regard to the consequences then such acts could never be under control.
Due to the lack of legal constraints with regard to what is considered as a fair means to contract. No basis is mentioned which would regard any consideration as fair or unfair which ultimately leads to manipulation in builder-developer agreements, debt instruments, landlord-tenancy agreements, arbitration agreements, etc. What we need to understand is that just the presence of something as consideration shouldn’t be necessary, its fairness should also be checked. Even if this point of fairness is not mentioned in the arguments of either the parties, the courts should take it as their responsibility to ensure that no one is being unjustly benefitted from the contract.
Conclusion
It is the duty of the court to ensure that all the parties of a contract, regardless of its mode of formation are being protected, any contract isn’t being used unfairly wherein one party is getting more benefit than the other and that the wrongdoers to be punished regardless of the age.
In this article, we discussed the three areas which could be looked over again by the court. So, amendments can be brought on these aspects, and recommendations of the Law Commission should be looked into carefully and there should be taken into consideration so as to ensure that justice is delivered to all.
With that being said, I do believe that the Indian Contract Act is well-drafted legislation, however, certain amendments would only help it to keep up to date with the latest global business practices. This would not only benefit the citizens of India directly but also, entail more confidence on the part of foreign parties and get them the do business in India