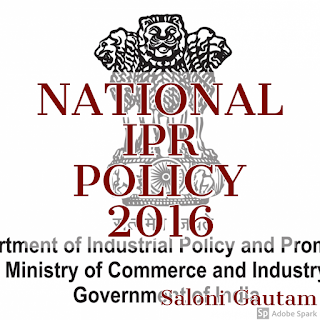 In India, we find many laws related to many topics and recently we have been witnessing a new policy related to IPR. We all wonder what is IPR and why it is required to be protected by legislation. IPR stands for Intellectual Property Rights, rights concerning Intellectual Property.
Let us first understand what an Intellectual Property is. Intellectual Property means an invention, idea, design, etc. that somebody has created and that the law prevents other people from copying. According to TRIPS, “Intellectual Property rights are the rights given to persons over the creations of their minds. They usually give the creator an exclusive right over the use of his/her creation for a certain period of time.”
Intellectual Property rights can be divided into 2 main areas – Copyrights and Industrial Properties.
Industrial Property can be further divided into 5 main areas – Trademarks, Designs, Patents, Geographical Indications, and Trade Secrets.
Copyright
Copyright is a right given by the law to creators of literary, dramatic, musical and artistic works and producers of cinematograph films and sound recordings. In fact, it is a bundle of rights including, inter alia, rights of reproduction, communication to the public, adaptation, and translation of the work. There could be slight variations in the composition of the rights depending on the work.
The Copyright Act, 1957 protects original literary, dramatic, musical and artistic works and cinematograph films and sound recordings from unauthorized uses. Unlike the case with patents, copyright protects the expressions and not the ideas. There is no copyright in an idea.
Although copyright protects the work but with subject to certain conditions, a fair deal for research, study, criticism, review and news reporting, as well as the use of works in library and schools and in the legislatures, is permitted without specific permission of the copyright owners. In order to protect the interests of users, some exemptions have been prescribed in respect of specific uses of works enjoying copyright. Some of the exemptions are the uses of the work
Industrial Property
Trademarks
The notion of ownership of creation or innovation and its protection is not new to mankind. In ancient time the marks were used to identify ownership and to deter would-be thieves. Also in this way, people tried to control low-quality goods, and as the maker of the product was identified automatically the infringers were punished. In the Middle Ages two basic kinds of marks were used:-

We can understand that the use of a trademark is not new for mankind and in Middle Ages it was used to prevent the low-quality products or counterfeited products by using unique marks and it was helpful to make the producer liable for the quality of the goods that were being produced and helped them to retain their customers.
No specific law was made to protect the trademarks and common law principles of equity and passing off were followed for the protection of trademarks until 1940. The first act specifically for trademarks can be spotted as The Indian Trademark Act, 1940.
There are various other laws which came into force after The Indian Trademark Act, 1940. Some of them are as given below:-

Protection of Domain names is given under Trademark Law itself.
The relief for Trademark Infringement is given under the Trademark Act and Passing off is a common law tort, which can be used to enforce unregistered trademark rights. The law of passing off prevents one person from misrepresenting his goods or services as that of another.
On 8th February 2007, the Union Cabinet ratified India’s accession to the Madrid Protocol. The Trade Marks (Amendment) Act, 2010 was passed on 21st September 2010 to bring into force the Madrid Protocol in India.
Digitization of trademark registry has brought a significant change to the use of the trademark.
Government has taken initiatives towards IP awareness and protection.
The scenario changed after the Trademark Act, 1999 which brought about the Fundamental changed in the law governing the filing and prosecution of trademark law in India.

Designs
The industrial design recognizes the creation new and original features of new shape, configuration, surface pattern, ornamentations and composition of lines or colors applied to articles which in the finished state appeal to and is judged solely by the eye.
The registration and protection of industrial designs in India are administered by the Designs Act, 2000 and corresponding Designs Rules, 2001 which came into force on 11th May 2001 repealing the earlier Act of 1911. The Design Rules, 2001 was further amended by Designs (Amendment) Rules 2008 and Designs (Amendment) Rules 2014. The last amendment in Designs Rules came in to force from 30th December 2014, which incorporates a new category of an applicant as a small entity in addition to a natural person and other than the small entity.
Patent
Patents refer to enforceable exclusive rights granted to the inventor in exchange for his/her making their invention public. An invention relating to a product or a process that is new, involving an inventive step and capable of industrial application can be patented in India. However, it must not fall into the category of inventions that are non-patentable as provided under Section 3 and 4 of the (Indian) Patents Act, 1970.  In India, a patent application can be filed, either alone or jointly, by the true and first inventor or his assignee. Patents in India, once registered, are valid for 20 years from the date of registration. Under the (Indian) Patents Act, 1970 only a civil action can be initiated in a Court of Law.
Geographical Indication
A geographical indication (GI) is an indication, whether in the form of a name or sign, used on goods that have a specific geographical origin and possesses qualities or a reputation that are due to the place of origin. Geographical indications are valuable rights, which if not adequately protected, can be misused by dishonest commercial operators to the detriment of both the consumers and the legitimate users. Articles 22 to 24 of Part II Section III of the TRIPS prescribe minimum standards of protection to the geographical indications that WTO members must provide. India, in compliance with its obligation under TRIPS, has taken legislative measures by enacting the Geographical Indications of Goods (Registration and Protection) Act, 1999, which came into effect on 15th September 2003 and the Geographical Indications of Goods (Registration and Protection) Rules, 2002. GIs ones registered are valid for the next 10 years and during that time no unauthorized person can misuse the product marked as a GI.
Trade Secret
Trade secrets, just as other intellectual property rights, can be extremely valuable to a company’s growth and sometimes even critical for its survival. Businesses must ensure that they adequately protect their business processes, technical know-how and confidential information from competitors. A trade secret may refer to a practice, process, design, instrument or a compilation of data or information relating to the business which is not generally known to the public and which the owner reasonably attempts to keep secret and confidential. Such data or information may also involve an economic interest of the owner in obtaining an economic advantage over competitors. The precise language by which a trade secret is defined may differ, however, there are three factors, which can be said to be common to all such definitions. They are –

The Objective of the National Intellectual Property Rights Policy, 2016