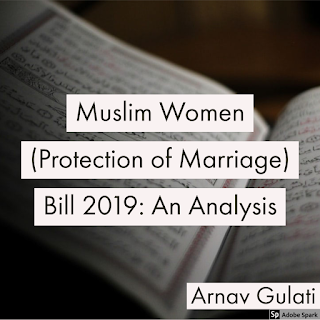 India has always been liberal towards giving religious autonomy to every group since ancient times. Though there has been many ups and downs this culture has maintained its uniqueness for ensuring every possible way to provide the liberty of faith. However, the Muslim Personal Laws have always been in controversies in independent India and have led to a variety of judicial precedents from the most celebrated ‘Shah Banu’ case to the recent Shayra Banu’s judgment.  One of the many reasons for the many judicial interpretations is that the Muslim Personal Law in India is largely uncodified.  That is to say, it is not sanctioned by an Act of Parliament. One of the many issues is the practice of ‘Talaq-i-Biddat’ popularly known as instant ‘triple talaq’. The same is defined as a form of unilateral divorce given by a Muslim husband to his wife by pronouncing ‘talaq’ three times in one breath without justifying any reasons for the same. This form of divorce is, however, not mentioned in Holi Quran and was later developed by an Islamic calif named Omar. For a long time, it has been observed that this practice was misused by many of the Muslim men arbitrarily. Therefore, in 2017, the Supreme Court by a Constitutional Bench judgment declared the practice of ‘talaq-i-biddat’ as void and illegal. In lieu of the judgment, the Legislature drafted a Bill criminalizing the practice of instant triple talaq. Ever since the Bill has been tabled before the Parliament it has failed to get passed in the Rajya Sabha. Currently, it is a pending bill in seventeenth Lok Sabha.
Analysis Of The Bill
Which Law is Required: Criminal or Civil?
One of the key questions that arise before making any law is whether we categorize it as a civil wrong or a criminal wrong. In this matter, the union chose to make a penal law i.e. categorizing Triple Talaq as a crime. Under section 4 read with section 3 of the bill, the act of giving instant triple talaq to the wife is void and illegal and is punishable with up to three years of imprisonment and the convict shall also be liable for fine. One of the good features of the bill is that it also includes talaq given through electronic means along with the spoken or written form. The intention of the government seems to create deterrence in the minds of Muslim husband to restrict them to commit this act. Prima facie it appears to be a good step but in my view, there are certain limitations upon implementation of these provisions in a practical scenario.
Firstly, when this act is in accordance with the ruling of the Supreme Court which specified triple talaq to be void that means even after pronouncing the talaq, the marriage will subsist and if we send the husband for imprisonment during the subsistence of the marriage, what will be the status of that marriage? Will the couple be able to restore that marriage? The answer in all probabilities appears to be negative.
Secondly, as far as the deterrence factor is concerned, yes a penal provision causes a deterrence but there can be other ways available in civil remedies. For instance, if a man pronounces talaq then it is in the hands of the wife to continue the marriage or not, if she chooses to dissolve the marriage she can approach the court with a request for a decree of divorce along with it, the husband should be instructed to compensate for the wrongdoing by way of regular maintenance and a fixed alimony which should be a substantial amount, for example, at least be equal to thirty percent of the assets available with the husband. Such a provision will also create deterrence among Muslim men.
Thirdly, the bill made triple talaq a cognizable offense under section 7 of the said bill, which means that:-

Section 6 of the bill also mentions provisions related to custody of minor children, shall be in the hands of the wife as determined by the magistrate and according to section 5 of the bill states that the wife of the convict shall be entitled to receive subsistence allowance from him for herself and their dependent children.
Here the intention of the government behind making this section is to ensure the welfare of the victim but mere good intention is not sufficient unless it is backed by a good law which is useful in nature, the current provision seems to be impractical in this nature as the court shall order the convict to maintain his family who is in the prison with no means of earnings. The important question that arises here is, how this provision will be implemented in such a situation? As it is not foreseeable for any person to find ways for a man who is not in a position to earn for himself to be able to maintain his wife and children. Instead, if the man had not been in prison he would’ve been in a better position to provide subsistence allowance to the victim and their children.
Conclusion
The present bill shows the intention of the Legislature to make a law on the issue as early as possible in consonance with the judgment of the Hon’ble Supreme Court. However, the same has many shortcomings when it is tested on the floor of reality. Starting with the brief of my above submissions, firstly, the provision for imprisonment itself is unreasonable as the marriage is subsisting then what good it would do to that if we send the husband to prison, also as the husband is still having other options of unilateral divorces namely, Talaq-i-Ahasaan and Talaq-i-Hassan, and if  he uses any of those rights than what will happen to the wife and how will he maintain her during  iddat period from the prison. After that, as mentioned above it is unreasonable to expect a person in prison to have the ability to pay a subsistence allowance to the victim.
In my opinion, if this bill is enacted, it will not do any good to the Muslim women instead it may even worsen their situation. It is still doubtful whether the intention of the government is to deter Muslim men or do something for the welfare of women. Even if the intention is for doing welfare, it cannot be fulfilled and I would like to end by stating that. Many a time, things done with greatest intentions are not as appropriate as they are meant to be.