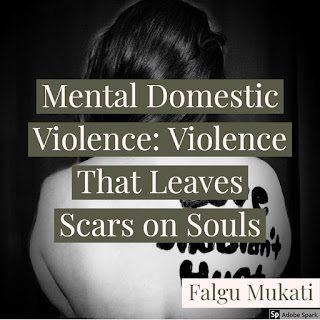 “Emotional abuse is just as bad as physical abuse. Worse! You can heal broken bones; you cannot heal a broken mind.”
– Quotes Gate
Domestic Violence is a form of violent or aggressive behavior by one of the spouses to another or by one or both the spouses to their children. It is a very common notion of the people that domestic violence means only physical abuse by one of the spouses to another. But there are various types of Domestic Violence. Types of Domestic Violence are-:
1) Physical Violence
The use of physical force by one spouse to another, generally physical force is exerted by the male partner on children or wife. For example, hitting with a belt, biting, attempt to choke to death, impel, grabbing, etc. In some cases, physical violence may also lead to death or critical injury.
2) Economic Abuse
Economic abuse involves depriving the partner of its economic freedom, making him/her dependent on others. For example, restricting them from using their salary, keeping all the financial resources to themselves and much more.
3) Psychological Abuse
Psychological abuse consists of creating a sense of fear, controlling the victim. It consists of controlling the actions of the victim. For example, threatening to cause harm to the victims near ones, blackmailing, denying permission to communicate with others.
4) Emotional Abuse
Emotional abuse consists of degrading a person’s self-respect. Forcing a person to feel low, insulting him/her in public, questioning his/her ability to make decisions, doubting his/her character.
The concept of Mental abuse as a form of Domestic Violence is very much prevalent in today’s times. However, Mental Abuse does not cause physical injuries thus its very existence is ignored by society. Physical Abuse causes injuries which can be cured most of the times, however mental abuse leaves a scar on the mind and soul of a person which cannot be cured. The Domestic Violence Act, 2005 recognizes Mental and Psychological Abuse as a type of Domestic Violence. India is a patriarchal society. It has certain unwritten rules for women one of them being that women should not go against their husbands; they must obey them. Often their disobedience leads to the use of violence in any form by their husbands to them.
Mental Abuse is a form of cruelty which has an impact on not only the mental health of the victim but also on their personality. It also leads to mental conditions such as chronic depression, psychological trauma, post-traumatic stress disorder, and anxiety. Situations such as disrespect for the victim’s parents, threatening to cause harm to the children, insulting the victim and the children in public, doubting the victim’s character, frequent quarrels demoralize the position of women. Such a form of violence compels them to doubt the fact of their existence.
However, proving Mental Abuse in eyes of law is a difficult task as there are no scars or injuries on the body. However, in the recent verdicts pronounced by the judges of different High Courts showcase the fact that Mental Abuse can be considered as a ground of divorce. Justice Kailash Gambhir of the Delhi High Court overruled the decision of a lower court and thus granted a divorce. In this case, he observed that questioning or doubting a women’s character amounts to mental abuse and thus can be considered as a ground for divorce.
Effects of Abusive Relations on Children
1) Mental and Emotional Issues
Witnessing violence or frequent quarrels between parents instills a sense of fear and stress among the children. The children may often blame themselves for the situation. Children may experience emotional issues such as they become introvert, run away from challenging situations, psychological issues such as depression, anxiety, suicidal thoughts.
2) Learning Issues
Frequent quarrels stress whether mental or physical viewed by children has an impact on their minds, as a result, they lack concentration skills. Young minds or developing minds cannot tolerate such trauma and violence and thus they are unable to focus.
3) Behavior
Children often imitate their parents’ actions. They observe their parents’ behavior very closely. Thus, it is quite possible that children may grow up to become violent when they are in a relationship. For example, boys might become abusive and violent like their fathers, and girls might accept this form of violence since they’ve seen their mothers.
The violence meted out in any form is unlawful. Physical violence can be treated and cured over a period of time but the acts of mental cruelty cannot be cured. Although mental cruelty as a form of violence is more prevalent it is not accepted as a form of violence. Many women who face this form of violence very often accept it as a normal thing, since in a patriarchal society they are taught to accept every type of behavior of their husbands.