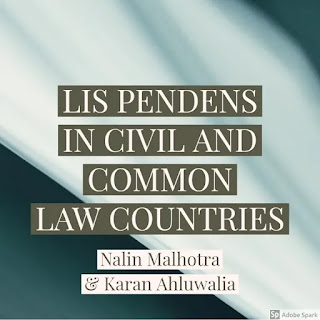 A literal translation of Lis Pendens means a pending legal action, it is the maxim behind the genesis for the regulation of multiplicity of the proceedings. Lis Pendens prohibits the initiation of parallel proceedings of the same cause between the same parties but simply in a different forum. It is accepted worldwide that multiplicity is undesirable as it leads to a wastage of resources. Numerous countries the world over have formulated their own methods of precluding such multiplicity with one of the most common responses being declining jurisdiction. In civil law countries, the jurisdiction is declined through the old first in time rule, which states that if a suit has been initiated in a court or an adjudicating body then similar proceedings cannot be initiated with the other body while the proceedings are still being considered. In common law countries, however, the doctrine of forum non-conveniens is used, wherein lis pendens is simply a factor for declining jurisdiction in the assessment of an appropriate forum.  In this way lis pendens forms an individual doctrine in civil law countries, but in common law countries, it is simply a part of a larger albeit an important part of the doctrine.
Lis Pendens in India
In India, the courts have defined the principle of forum non-conveniens as the discretionary powers of the court to entertain a suit on the grounds as to whether there exists a more appropriate forum to entertain the plea or not. As per the Delhi High court in the case of GlaxoSmithKline and Horlicks Limited v. Heinz India, the test for the application of the doctrine is of two parts

The balance of convenience test is also considered to be a material consideration for the same. There is a proper statutory provision that prohibits parallel proceedings as given under Section 10 of the Code of Civil Procedure.