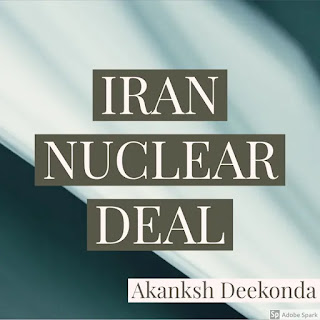 Iran Nuclear Deal is the consequence of Joint Comprehensive Plan of Action which was an agreement signed by P5 countries United States (U.S.), United Kingdom (U.K.), France, Russia & China along with Germany, Iran and European Union (E.U.) to lift the Economic Sanctions imposed by United States and Israel and to crumble nuclear actions of Iran. Iran was actually a country much populated with Shias and it’s neighboring countries like Saudi Arabia and Isreal are mostly populated with Sunnis.  Due to the revolts of Shias and Sunnis. The US had good relations with Saudi Arabia and Isreal due to Continuous trade. As the U.S. support this country, Iran started supporting Anti-Isreal and Anti-U.S. troops like Hezbollahs and Hamas. This positions Iran to rivalries with the United Nations.
The plan and interest of Iran to develop Nuclear weapons started since the 1980s. Iran has then signed the Nuclear Non-Proliferation treaty. In pursuit of nuclear weapons was against the NPT treaty. To resist Iran in developing nuclear weapons, the United States with Israel conducted

The covert actions performed by Iran, Israel and the US, therefore, threatened other countries. They raise the imminent danger in the middle-east affecting the stability of volatile Middle-east prior to 2013. This ultimately led to forming a peace agreement between these countries Iran and the US with the help of the United Nations Security Council, United Kingdom, European Union, France & Germany, and International Atomic Agency and this agreement is Iran Nuclear Deal in 2015. Iran Nuclear deal signed between Iran, European Union &P5 countries in 2015 at Vienna of Austria.