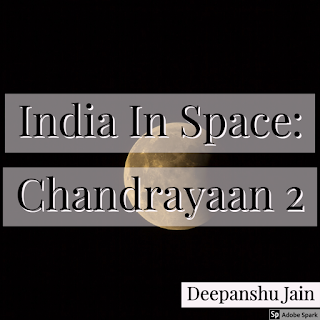 Indian Space Research Organisation on Monday dated 22-07-2019 successfully launched its second moon mission called Chandrayaan-2 earlier which was scheduled on 15TH of July. Let us first study the history of  ISRO starting from its first satellite to the latest one.
ISRO (Indian Space Research Organisation) was formed on 15 August 1969, with its Headquarters in Bengaluru, Karnataka. The current Chairman of ISRO is Mr. K.Sivan. ISRO superseded the INCOSPAR in 1969. ISRO is the space agency of the Government of India. Its vision is to “harness space technology for national development while pursuing space science research and planetary exploration. The Indian National Committee for Space Research (INCOSPAR) was established in the tenure of Jawaharlal Nehru. In 1972 Government of India set up a Space Commission and the Department of Space (DOS), bringing ISRO under the DOS. The establishment of ISRO thus institutionalized space research activities in India. It is managed by the Department of Space, which reports to the Prime Minister of India.
ISRO built India’s first satellite, Aryabhata, which was launched by the Soviet Union on 19 April 1975. It was named after the mathematician Aryabhata. In 1980, on the other hand, Rohini became the first satellite to be placed in orbit by India’s homogeneously made launch vehicle called SLV-3. ISRO subsequently developed two other rockets: the Polar Satellite Launch Vehicle (PSLV) for launching satellites into polar orbits and the Geosynchronous Satellite Launch Vehicle (GSLV) for placing satellites into geostationary orbits. These rockets have launched various communications satellites and Earth observation satellites. Two other Satellite navigation systems like GAGAN and IRNSS have also been developed and deployed.
Talking about Organisational structure and facilities ISRO is managed by the Department of Space (DOS) of the Government of India. DOS itself falls under the authority of the Space Commission and manages the following agencies and institutes. Here is the whole organizational structure:- 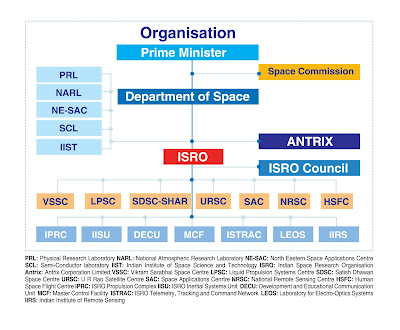