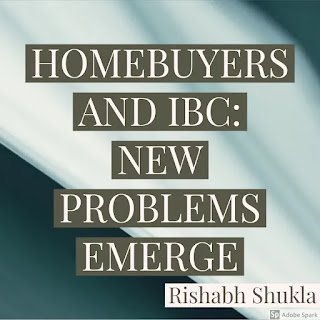 Some More Problems
Ever since home buyers were given the status of financial creditors under the Insolvency and Bankruptcy Code (IBC), a lot of them have moved the National Company Law Tribunal (NCLT) against the developers of stalled and delayed projects. “Since June 2018 (after getting the financial creditor status), a total 1,821 cases have been filed by homebuyers against builders under the code,” said minister of state for corporate affairs Anurag Singh Thakur last week, in Parliament.

The issue is not going down well with the developers who are alleging that the law is being misused by some homebuyers and the frequency of such cases, they claim, is causing a delay in the construction and delivery of projects. They are now demanding an amendment to IBC.

The Scenario
The Full Bench of the Hon’ble Supreme Court on 9th August 2019 in Pioneer Urban Land Infrastructure & Ors vs Union of India & Ors, has upheld the constitutional validity of the Second Amendment of IBC Act, 2016, wherein “Real-estate Allottees” as defined under Section 2(d) of the Real Estate (Regulation & Development)  ‘RERA’ Act, 2016 were brought within the scope of financial creditors under the Insolvency & Bankruptcy Code, 2016. This will enable the home buyers and other allottees to invoke Section 7 of IBC (which allows the financial creditor(s) (either individually or jointly) to file an application in National Company Law Tribunal ‘NCLT’ for initiating corporate insolvency resolution process against a defaulting company) against defaulting promoters.

The judgment can be analyzed briefly as follows:
A. Home-Buyers are within the Scope of Financial Creditors
Under Section 5(7) of the Insolvency & Bankruptcy Code, 2016 (hereinafter referred to as the “IBC”), financial creditor means any person to whom a ‘financial debt’ is owed and includes a person to whom such debt has been legally assigned or transferred to. The Full Bench of the Supreme Court of India relied heavily on the report made by Insolvency Law Committee and observed that home buyers finance real estate projects by paying amounts in advance to the developers for the construction of the project. Therefore, like banks and financial institutions, home buyers are rightly identified as financial creditors.
B. The supremacy of the IBC & Several Remedies
The Judgment expressly clarifies that Home Buyers as per their choice can initiate proceedings against the Developers/Promoters under RERA and Consumer Protection laws and seek appropriate remedies. Remedies under the RERA and the Code are entirely distinct & independent from each other, however, in case of any conflict, the Code will prevail. Thus, this Judgment places heavy weightage to the Code and modern Jurisprudence.
C. Defense Available with the Promoters/Developers Opposing the Admission of the Insolvency Petition
The Court also recognized that the delay in delivery of possession by the developers may occur, in certain cases, due to factors not attributable to the developers. Some instances of defenses which the developer may plead before the NCLT are:

The Court upheld the right of home buyers to vote on resolution plans as members of the Committee of Creditors ‘CoC’ And under the Insolvency and Bankruptcy Code (Amendment) Bill, 2019, the home buyers can through their common authorized representative, cast votes only in two ways – either to approve or disapprove a resolution plan. Any decision taken by a vote of more than 50% of the voting share is binding on the group.
E. Operative Part

Multiplicity of Proceedings: In cases where a single large project of the corporate debtor i.e. Developer has various association of persons for separate buildings or phases registered separately with RERA, there might be chances of multiple proceedings initiated simultaneously by the home buyers against the same developer under RERA, Consumer Protection Act and IBC which can put the developers into extreme position of difficulty.
Conclusion
The Hon’ble Supreme Court through this judgment has given heavy weightage to IBC and Modern Jurisprudence and has also opened the third and fastest route for homebuyers to achieve quality justice in commercial disputes.
This judgment comes as a complete relief favoring the Home Buyers in every aspect. The issue highlighted above which the Developers might face in the coming times will be Prima- Facie Settled by the NCLT  while admitting Section 7 Petition.
Lastly, In the cosmopolitan cities like Mumbai/Delhi where the RERA courts are overloaded with Dockets of litigation the IBC Practice at NCLT will flourish in the disputes between Real Estate Developers and Home Buyers, as more home buyers wanting to drag the developers under the IBC and face the music at the NCLT.