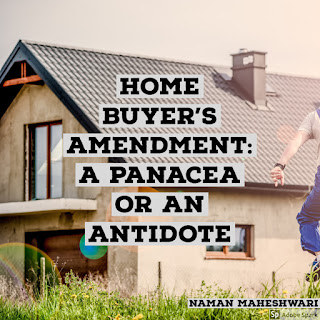 With the plethora of legislation dealing with the debt restructuring and assets realization in insolvency proceedings before different statutory authority creates a lot of confusion and raised an ambience for a consolidated law on insolvency proceedings and this dream has been fulfilled in 2016 by bringing IB Code 2016 with the aim of quick process for liquidation of company.  In the same year unraveling issues in the field of Real Estate has led to emergence of the Real Estate Regulation Act, 2016 for protecting the interest of the allottees or home buyers as their primer concern.  As the home buyers have not been mentioned in any of the category i.e. financial or operational creditor they are not able to assert their right to initiate insolvency proceedings against the developer. This ambiguity raised an alarming concern as it becomes a tool for the developer to evade the liability of home -buyers.
The same concern was faced in a dispute between Chitra Sharma v Union of India and in Amrapali case that interest of such stakeholders has to be taken into consideration. The Insolvency Committee Report 2018  that plethora of amount has been financed from the home buyers, they have to be provided protection by enabling them to be in the category of financial creditors and get right to initiate insolvency proceedings under Section 7 of IB Code. And due to conflicting objectives and non-obstante clause, both the laws are in conflict with one another with alarming ambiguity that which law has to prevail.
All these factors and alarming situation has propelled the government of India to bring an amendment by inserting two explanation in clause 8(f) of section 5 of IB Code that any amount raised from allottee or home buyer would be considered commercial in nature and he is considered to be financial creditor  and further amendment concern that home buyer will be a part of Committee of Creditors (CoC).
Such amendment was considered to be a big relief for home buyer against an errant developer who is under a debt trap due to various reasons and delay in projects to file for insolvency proceedings and be a part of Committee of Creditors for looking over the pending cases and a vote in the resolution plan  for recovering their hard earned saving money.
Home Buyer: Secured or Unsecured?
But such amendment has brought with a bonafide intent but is unable to harness its intent due to the presence of various loopholes. The situation remains idle as even considering them as financial creditor but in which class i.e. secured or unsecured they will fall for prioritizing the proceeds of sale to be given is remain ambiguous and such amendment reflects the phrasing beating around the bush and its upon them to argue for same in which category they will fall as per the linguistic analysis of the terms of agreement.
Disputed Debt
Another concern is that when will the default will occur for initiating CIRP has been in the grey area. The amendment is based on the foundation that there is a presupposition that the developer is defaulter but that’s not the case. The default will not occur if there is a delay in handing over the possession to allottees but it will occur when it becomes due  for admission of the application under section 7 of IB Code. If the developer is not providing flats on time is considered as default then it will lead to abuse of law.
Third Party Interest
In Ajay Walia v M/s Sunworlds Private Limited,  it was held that if the home buyers have subrogated their rights in favour of the bank and enter into tri-partite loan agreements they are not considered as a financial creditor. The Hon’ble Supreme Court in Swiss Ribbons Pvt. Ltd. & Anr. v. UOI  has held that IB Code is Constitutional but Justice Nariman has asked responses from MCA and Law &Justice to respond to the petition challenging the constitutional validity of the home-buyers amendment.
Although, the amendment is considered to be a sigh relief for home buyers but there are a lot of questions that need to be reconsidered so that the amendment is able to harness its intent in its full entirety.
References