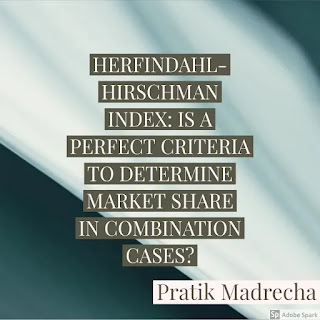 The HHI is calculated as:

• HHI = 402 + 302 + 152 + 152 = 1,600 + 900 + 225 + 225 = 2,950
This HHI is considered as the highly concentrated market as it is more than 2500 value. Even if there are four times in the market it canoe be considered as the competitive market as the number of the firm in an industry does not indicate about the market concentration which is why the calculation of the market concentration becomes necessary.
For example, take an industry with 20 firms. Company one has a 48.59% market share of and reaming 19 remaining firms has a market share of 2.71% each. The HHI value would be 2,500, showing a highly concentrated market. If the company one had a market share of 35.82% and remaining firms had a 3.38% market share each, then the HHI value 1,500, showing a competitive marketplace.
Limitations of the HHI Index
The basic simplicity of the index has some disadvantages in terms of failing to determine the specific market. Each market has different circumstances and the once common market index cannot be considered to calculate the market concentration.
Another limitation is in defining the market share is taking the geographical factor into consideration. This occurs when there are companies within an industry that operate with equal market share but they have an operation in specific areas of the country so that each company has a monopoly in that market place in which is it does the business.
Because of these reasons, the HHI does not take factor r into consideration leading to the unclear calculation of the correct competition in the market.
Judicial Decision
In Marathon Oil Co. v Mobil Corp. [1] and BASF Wyandotte Corp., [2] the court while accepting the HHI index for the calculating of the market concentration and relied solely on the market share of the company in the industry. In another case of the Federal Trade Commission’s “shared monopoly” case, [3] HHI’s in excess of 2700 was found be excessive concentration in the market. Then in the case of Pabst Brewing Co. [4] measured market concentration solely by the calculation of the HHI.
The Indian Competition regulatory body in the acquisition of DLF Utilities Limited by PVR Limited, consciously laid down an outline of HHI thresholds to be administered in India. The order categorizes markets with a post-merger HHI of below 1000 as un-concentrated; between 1000 and 2000 as moderately concentrated; and above 2000 as highly concentrated. In conjunction with the absolute post-merger HHI, the magnitude of increment in HHI holds great utility as well. An HHI increment of more than 150 and 250 in the moderately concentrated and highly concentrated markets respectively raise a likelihood of AAEC.
Further, in case of VR Limited (PVR) (C-2015/07/288) the CCI emphasis by saying that “Keeping in view the thresholds used in the advanced jurisdictions, it is observed that the markets with post-merger HHI more than 2000 are considered as highly concentrated and markets with post-merger HHI between 1000 and 2000 as moderately concentrated, with the indication of concern of an adverse effect on competition in the market, if: (a) the post-merger HHI is above 2000 and increase in HHI is 150 or more, or (b) the post-merger HHI is between 1000 and 2000 and increase in HHI is 250 or more”
The Proposed Combination is likely to result in a change in the Herfindahl-Hirschman Index (HHI) of more than 500.
Then in Case of Bayer AG
Assessing the merger between Grasim Industries Limited and Aditya Birla Chemicals (India) Limited (Grasim Industries Case), [5] the CCI implicitly banked on the HHI thresholds demarcated by US Department of Justice (US DOJ) in the Horizontal Merger Guidelines. In DOW Chemical chase, [6] the CCI categorizes the market for, firstly, fungicides for grapes, and secondly, MAH grafted polyethylene as moderately concentrated on the basis of findings of HHI. In the merger between Airtel and Telenor India, [7] the CCI ascertained a 243-point HHI increase in the retail mobile telephony services, with Gujarat being the relevant geographic market as significant.
However, the CCI in the preceding orders never adduces any framework or a schema as its guiding lodestar for navigating through HHI valuations. Further, in a scheme of arrangement notice filed by Aircel Limited, the CCI declared an increase in HHI of 300 in a moderately concentrated market (1800 HHI) not significant enough to cause AAEC, without elucidating upon from where it arrives at such a conclusion.
Conclusion
It can be seen that it is a useful tool for the analysis of the merger effect on the market after the merger is considered is only a particular initial screening device. But, it cannot be relied solely on to decide the concentration of the parties. There are many other factors that are to be considered before reaching to the final conclusion.
Sometimes, the HHI index does not work when there are numerous competitors present in the market and there is no market-dominant player.
Hence, the use of HHI depends on case to case basis. It can be used as primary screening in the combination.
References
[1] 669 F.2d 378 (6th Cir. 1981)
[2] No. 9125 (FTC May 14, 1982)
[3] Kellogg Co., No. 8883 (FTC Sept. 1, 1981)
[4] Pabst Brewing Co. v. G. Heileman Brewing Co., No. Civ. 82-440 (D. Del. July 21, 1982)
[5] Combination Registration No. C-2015/03/256, 31st August 2015.
[6] Combination Registration No. C-2016/05/400, 8th June, 201
[7] Combination Registration No. C-2017/01/471, 16.03.2017