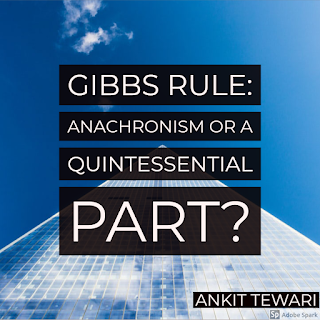 Cross-border insolvency or foreign insolvency as it is said is a multifaceted puzzle that must be unraveled with due care and diligence. With the emergence of globalization, the world is contracting and becoming more global the result of which is the trend of cross border nature of insolvencies. Therefore, it is indispensable that there are stringent provisions in place for these trends, but at the same time, it is imperative that these provisions should not amount to a draconian piece of legislation. It should be the best of both worlds so to speak.

With that in mind and keeping prominence on the Indian legal framework let us try to understand the conflict of Gibbs rule and whether it is really an anglocentric reasoning law and should be confined to history as some of the legal authors have propounded it as. Let us try to understand it from the perspectives of the Juris of England as well of India.
Legal Framework of Foreign Insolvency in England
Currently, the English Court recognize and give precedence to 4 prime sources of law in regards to foreign insolvency and they are as follows:

These 4 sources entwined lay down the grundnorm which determine the applicability of a country’s insolvency law and also provide as to how the insolvency laws of different states interact with each other.

Current Legal Framework in India
Concurrently in India, it is the IBC code which provides a two-pronged solution whilst dealing with cross-border insolvency. Section 234 and 235 of the act deal with the cross-border nature of insolvencies
Briefly stated, Section 234 empowers the Central Government to enter into agreements with other countries to resolve any issues or situations that crop up pertaining to cross-border insolvency or in other words to enforce the IBC code.
Section 235 empowers the adjudicating authority (NCLT) to issue a letter of request to courts in other countries where that the assets of the debtor are situated and such assets possess a connection with the aforesaid proceedings provided that reciprocal arrangements have been dealt with the country under Section 234.
Enforcement of Foreign Decrees in India
A foreign judgment can be enforced in India in the following ways:
Note – ‘Reciprocating territory’ means any country or territory outside India which the Central Government may by notification declare to be a reciprocating territory for the purposes of Section 44-A. Incidentally, the United Kingdom falls under the list of reciprocating territories.
Now let us try to understand the substance of the Gibbs rule and what it entails.
The Rule of Gibbs and The Most Reason Attack On It
The Gibbs rule as derived in the case of Antony Gibbs provides that a party to a contract made and to be performed in England is not discharged from liability under such contract by a discharge in bankruptcy or liquidation under the law of a foreign country in which he is domiciled.

The rule has been tested time and again and the most recent test upon this rule was in the case of Bakhshiyeva v. Sberbank of Russia & Ors.
In that case, the International Bank of Azerbaijan (“IBA”) implemented a restructuring plan in relation to debts worth $3.3 billion. The plan was approved by 93.9% of creditors, however, two creditors Sberbank and Franklin Templeton did not vote on the plan and argued that it could not bind them according to the Gibbs rule.
IBA obtained a Recognition Order in the UK under the CBIR, 2006 which would impose a wide-ranging moratorium, thereby preventing the two creditors from commencing or continuing any action against IBA or its property without permission from the Court.
However, the Court of Appeal gave the decision in favor of the respondents and upheld the ‘Gibbs Rule’ as they had not submitted to the foreign insolvency proceeding and henceforth did not fall within the exception of the said rule. The Court also left a parting remark that the nevertheless the rule of Gibbs had been criticized; the final hammer of whether the said law should be reviewed would be upon the shoulders of the Supreme Court.
Issues of Gibbs vis-à-vis Indian Scenario
When the situation pertains to contractual obligations between foreign creditors and Indian debtors falling under the purview of English grundnorm, the conflict of interest starts to crop up.
Going by the provisions of English insolvency law, Section 426 of the Insolvency Act constitutes a duty on the U.K. courts to assist the insolvency courts of “relevant countries”. Section 426 while a useful provision is very limited in scope as it is only applicable to requests for assistance made by the insolvency courts of “relevant countries under which India does not fall. So that is a no go.

India has also not yet adopted the UNCITRAL Model Law on Cross-Border Insolvency. The existing provisions in the Code do not provide a comprehensive framework for cross-border insolvency matters and hence the process of bilateral agreements as suggested under IBC provides for a long road of negotiations of bilateral agreements with other countries.

Another conflict of the rule of Gibbs is that the English law doesn’t give recognition to foreign insolvency proceedings taking primacy over an English law debt but contrarily they expect a foreign court to recognize their own insolvency judgments in relation to a restructuring in England. This appears to be a fallacy according to the principles of comity.
However, the tides are turning outside the Juris of England. In the case of Pacific Andes Resource Development, the Singapore High Court didn’t give much heed to the Rule of Gibbs and propounded that “In the case of a contractual obligation governed by English law, a further rule should be developed whereby, if one of the parties is the subject of insolvency proceedings in a jurisdiction, it should be recognized that the possibility of such proceedings must enter into the parties’ reasonable expectations in entering their relationship, and as such may furnish a ground for the discharge to take effect under the applicable law”.
So going by the aforesaid cases, the stalemate of Gibbs continues.
The Way Forward
The Web of Cross Border Insolvency has spun a long way since its origin. The migration of foreign insolvency laws from placing emphasis on provincialism to moving on to Modified Universalism shows a state of change in the laws in achieving a successful cross-border restructuring.
The ‘rule’ in Gibbs requires that any substantive remodeling of English contractual rights be endorsed by the provisions of English law. The rule can be said to be anachronistic where the world is moving on to principles of modified Universalism for the conclusion of foreign insolvency.

The unanswered questions as of now are that: Firstly, will the English creditors need to prove the debts in Indian Courts and secondly, whether a moratorium under IBC will apply to foreign proceedings before foreign courts. Will we see these issues being solved soon? Only time will tell.

Lastly, the IBC code in its drafting should have focused more on the four essential ingredients (a) Access (b) recognition (c) relief (d) coordination that was germinated in the UNCITRAL Model Law as they are of utmost importance to the cross-border proceedings. But as it is said hindsight is always 20/20 and hence in regards to cross border insolvency laws the, there is more to come as “We live, and not for the first time, in interesting times”.