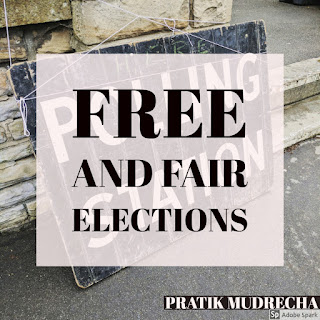 Free election and other form of civic participation are essential to the democracy. The election is at the heart of the practical means of the people to assert their contribution in the sovereignty.

Election is the process through which the people cast their opinion, choice in selecting the candidate to represent them. Election is the fundamental concept of the entire democracy structure. It is when the group of the people collectively elect its representative. Election is considered as the beginning in the democratic form of the government and all the other things follows it. Election matter for many reason in the democratic country as it determines the leadership with a proper laid down process. It is just a moment in a broader electoral cycle. Electoral periods are widely defined as time of party candidate selection campaigning and announcement of the election. Election is signal a moment in time in which either a previous or new ruler is confirmed or new leader are being brought into the government, this can make the turning point in the democracy of the country.
Political Party Systems In India
The political parties play a vital role in a parliamentary form of democracy and anxiety was expressed about the growing number of independent candidates.
The expression “political party” is defined under Section 2(f) of the RP Act, to mean “an association or a body of individual citizens of India registered under Section 29-A”. The definition was inserted by an amendment to the RP Act in the year 1989.
The political parties in India are need to be registered with the election commission as per the section 29A of the Representation act. It was inserted in the RP Act through the amendment in the year 1989.  From the language of Section 29A it can be deducing that the registration of the political parties with the Election Commission is not mandatory, but optional for the political parties, which intend to avail the benefits of Part IV of the said Act.
Free And Fair Elections
The Political parties in the election make the democracy workable. The most importance feature of the democracy is that people are governed by themselves through the representative they elect. For choosing the candidate for the election the most important criteria are that there should be choice available to them. Then, people must select the candidate who is most fitted to be elected.
Free election means the adult citizen can vote in election and stand for the election to form the part of the government. Fair election means election that are basically honest, and without mala practices and influences of the powerful person.
Election require the existence of the multiparty system so that the citizen can make a choice between the candidate fielded but the different political party holding divergent views and presenting different alternative to the problem of the people.
Trend of Coalition Parties
The party system and its scope convey the preference; social interest or suppression of the people belong to different background.
The recent coalition of the regional parties in the state of Uttar Pradesh and Bihar shows in the recent Lok Sabha election that there are only two major parties which are fighting the election. The election only two parties will fight against each other. It shows that the basic concept of the election that the people will have choice to accept their political leader out form the other several parties, is been failed. The coalition is like that in each seat only one party will fight (from the parties in coalition) and leading to decrease in the competitiveness of the party which was the main reason which can be seen behind the multi-party system in India.
The democracy cannot flourish in a country where political parties are not there. The question arises if parties themselves are democratically inclined in their decision making in internal structure.
Moreover, when the parties compete with one another in the election and thus this would lead to better and more responsible form of the government. As governance is a complicated thing, parties form and educate politician for whom political is consider as the profession.
They are the significant player of the political arena that seek to gain office of government, opposed the policy of the government when in the opposition.
Conclusion
The party system in India is been considered as one of the best system in all over the world. No country in the world has the number of party which your democratic system has. The constitution provides for freedom to every candidate eligible to contest vote can stand for the election. It provides that when any unfair and autocratic alliance by the political party is been made, it can be blocked by the new entrant of the political party in the political system.
But, if we see the upcoming election, the party are going for the coalition between each other and in final only two parties are in the arena. The question arises that is parties will go for coalition then would it be fair election in democracy. When we have only two party’s leader contesting the election, we are more or less moving towards the political system, of the autocratic form of the government.
In India, there is no law which restrict the coalition of the political party. We can imagine a scenario when, political parties divide constituency within themselves and other political party fight against each other. As we can see the candidate Kento Jinni (Arunachal Pradesh) elected unopposed in 2019 election. There is no purpose of election if only one candidate stands in the election.