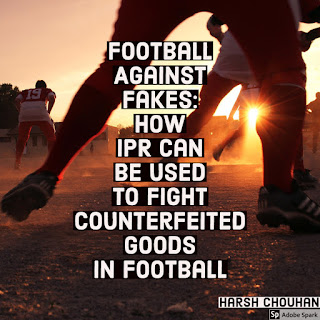 “Some people believe Football is a matter of life and death. I am disappointed by this attitude. I can assure you it’s much much more important than that.”
– Bill Shankly
Football is the most popular sport among the European nations and that statement itself calls for a big fan base alongside the growing number of national leagues, champion leagues and the World Cups. Nevertheless, the red herring in this popular sport is a fact which will concern both the governments and the Intellectual Property Laws of these nations.

A report published by OECD (Organisation for Economic Co-operation and Development) in the year 2016, states that up to 5% of the goods imported into European Union are counterfeited.  A figure like that can directly impact the popular sport of football, especially when Italy, Germany, France, UK and Spain (countries which constitute the Top 20 in the Deloitte Money League ) are in the Top 10 countries which are hit hardest by the import of these fake goods. Another shocking figure comes from one of the popular football leagues-the Premier League. In the 2015/16 season, the administration of the League alone seized around 1, 00,000 counterfeited items worth more than 1 Million Euros. That was followed by bringing down of around 13,000 down scaling of counterfeit websites.  To sum up the approximate value of these counterfeited goods imported in 2013, it would be around 461 Billion US Dollars.
All of these facts point towards one direction, that the Intellectual Property Law has been seldom used as a means of tackling the menace of counterfeited kits, jerseys and other merchandises. The trademark laws of the countries are a weapon, which if used in a sensible and strategic manner, can counter this counterfeiting practice.

Trademark Laws And Their Implications

A trademark is an exclusive right to use a registered trademark with respect to a certain goods or services. Its nature is that of an ‘industrial property’. If we delve into the nature of these trademark laws, they come under the heading of Right in rem- a right against the general public. Hence, the implications of the same are far reaching. The proprietor of the trademark has an exclusive right in order to safeguard the reputation with respect to the goods or services concerned.  Another important dimension is the balance of interest that a trademark law creates. It balances between the protection of the owner of the trademark right and the protection of the consumers.
Therefore, when the trademark law is seen in juxtaposition to the football game and its varied clubs and leagues, such a law provides them with a statutory right to exclusive use of the trademark.  Broadly, it can be explained as a monopoly right to sue for trademark violation any person who uses, without permission, such a trademark in the course of his/their trade. The aspect of non-registration of trademark, though, is not a hindrance to claim the same monopoly right. One can seek to protect its brand by bringing a common law passing off action to prevent a third party’s infringement over one’s right.
Given the significance accorded to brand recognition by football clubs and leagues, it does not come out as shock if they go to great lengths to ensure brand protection, and in the course of doing so, the use of intellectual property law in unavoidable and rather desirable.

Why Having A Trademark Is Important?
Trademark is something which, even if we don’t realize, is used on a daily basis by businesses across the globe.

Getting back to our ‘field’ of football, these incidents are a warning call to take the cover of trademark laws. 2015 witnessed the most successful team in Romania, Steaua Bucharest, finding it difficult to maintain their identity.  In 2014, the team temporarily lost not just their name but also rights to play in their club colours and club crest in a dispute with the country’s defence ministry. The dispute arose because of a disconnection between ownership of, and permission to use, the trademarks and names identifying the club. When the club was brought by a local businessman in 2004, the Army no longer wanted the club to use the name ‘Steaua’ name and brand, which ultimately led to a lawsuit. Such an incident can lead to a loss of image and distrust in the minds of the fans of the clubs and leagues, however small the scale may be. Hence, it is rightly said that, “a sporting spectacle cannot be owned in any ordinary sense of the word.”

These are some of the ways in which the football clubs, leagues, players and fans can fight against counterfeited goods, which can impact this popular game and its credibility on and off the field. However different strategies apply for different situations.

After going through all the facts and figures which depict the increasing quantity of counterfeited goods in to the international arena of football and then delineating upon the significance of Trademark laws, we can safely conclude that this passionate sport, which inspires millions across the globe, can still be saved. Trademark laws, one of the important IP Laws, can be the sight of respite for the policy makers. Commercial strategies, as above discussed, along with the protection of the trademark laws can contribute significantly. The governments of these nations and clubs have to take a strict stand on compulsory trademark registrations and regulations on the entry and exit of the goods that concern the sport industry. Teams and players can also contribute by being aware of their image rights, which is another issue hovering the sports industry.
Giving due importance to the Intellectual Property Rights in the field of sports, by the government, can be the first step towards the eradication of fake goods. Football against fakes, is a campaign that has to be seen in its spirit and not to be forgotten.