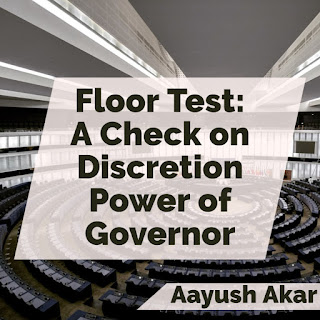 Because of its strongly imbibed “Unity in Diversity” culture, the Indian constitutional system is unique. India is a “Union of States” outlined for political and cultural unity, the elimination of divisive forces, and the effective administration of the huge country. The Indian Constitution offers an excellent framework for a smooth relationship between the Union and the States, on one side, and the intergovernmental States, on the other.

The legislative powers are distributed between the Centre and States keeping in mind the objectives of the Indian Union. Under Articles 245 and 246, the Union is given powers to make laws on matters of nature which are important for the unity and integrity of the nation listed in List I of the Seventh Schedule. According to those provisions the States are granted the power to make laws appropriate for the effective governance of the States in respect of the questions mentioned in List II of said Schedule. The Union and the States are authorized to legislate in the matters listed in List III, the Concurrent List, in order to ensure coordination and cooperation. The demarcation of power between the State and the Centre is the upshot of the detailed discussion in the Constituent Assembly.  There is a circumstance in which the Union can interfere in the dominion of the State i.e. under Article 356, Union can take over the jurisdiction of the State when there is a failure of the constitutional machinery of the State. The President of India who is the first citizen of India can take over the executive machinery of the State when the State Government is not running in accordance with the provisions of the Constitution. Article 356 is also used by the Centre when the political parties have not received the majority in the State Assembly and are failed to form the Government. The Governor as a convention invites the largest political party to stake claim to form the Government.
But since the Governors are appointed by the President who works on the advice of the Council of Ministers headed by the Prime Minister as per Article 74(2) of the Indian Constitution. The Governors hold office under the pleasure which is actually the discretion of the President who itself works on the advice of the Prime Minister. So, the executive head of the State Assembly works on the behalf of the ruling party at the centre and favors the ruling party of the centre in the state. There are instances where the Governor is favoring the ruling party in terms of the Government formation where that party itself has no majority which is per se unconstitutional. So the Supreme Court in various cases asking the largest party to prove the majority in the floor test.
Role of The Governor in Hung Assembly
In a parliamentary government system, the Hung Parliament takes place without an absolute majority (legislature) of parliamentary seats by any single political party. Under no overall control, it is also the less common legislature.  If there is a Bicameral Legislator and the administration is only responsible for the lower house, then the “Hung Parliament” is only used for that house. The majority of the two-party general elections will lead to an absolute majority and thus rapidly to the formation of the new government. This pattern is an exception to the “Hung Parliament” that can be regarded as anomalous or unwanted. It is unusual for a party to gain a simple majority of seats in a multi-party system of representatives elected by proportional representation, so a “Hung Parliament” is the norm and the term is seldom used. This term can be used for defining an election in which no established Party coalition, such as the German election in 2005, obtains an outright majority.
This Hung Parliament is similar to the “Hung Legislative Assembly” where no coalition of political parties or the single largest party has no majority to proof in the house of the Legislative Assembly. The Karnataka Assembly Elections produced an inconclusive verdict as no single party won a simple majority to form the government. However, the BJP won 104 of the 222 constituencies and emerged as a single largest party. Congress and Janata Dal (Secular) won 78 seats and 37 seats respectively.  With the results of the Karnataka assembly election throwing up a hung house, the Governor’s position has been based on whether to invite the new government to join the single largest party or the leader claiming majority with the post-poll coalition. A similar situation arose recently in the Maharashtra election where despite BJP being the largest party with 105 seats failed to form the government in the state. The other opposition parties Congress got 44 seats, Shiv Sena got 56 seats and the Nationalist Congress Party got 54 seats. They together formed an alliance known as “Maharashtra Vikas Aghadi”.  So the similar Karnataka election arises here where the Governor’s position has been based on whether to invite the new government to join the single largest party or the leader claiming the majority with the post-poll coalition.
It triggered a debate about the governor’s role in forming the government when an assembly is hung. The Governor must first invite the largest party to establish the government as a matter of convention. But in order to provide for a stable government, the decision needs to be ‘informed one’ and ‘on a sound basis’. In 2006, the President of India (then) Dr. A P J Abdul Kalam, addressing to the Governors, emphasized the importance of the Sarkaria Commission’s recommendations and said, “While the Constitution provides for many checks and balances, the Governor’s office has been granted independence in order to rise above day-to-day politics and circumvent compulsions whether arising from the center.”  In the case of Rameshwar Prasad v. Union of India, 2006,  a five-judge Constitution Bench, specifically supported the suggestions made by the RS Sarkaria Commission in its Center-State Relations Study, which illustrated the impartiality of Governors and their position in maintaining the constitutional mandate.
Later, in a case of a hung assembly, the M M Punchhi Commission also explained that the governor should follow “constitutional conventions”. The Punchhi Commission also prescribed in the case of a Hung Assembly:

In the case of Nabam Rebia and Bamang Felix v. Deputy Speaker, the five-judge bench suggested the opinions of the Punchhi and Sarkaria commissions on granting the governor a unilateral right to take an appeal on the floor check when the government lost the legislature’s confidence. In the case of S.R. Bommai v. Union of India, a nine-judge bench had illustrated the importance of a floor test as two political groups say that the floor test must be done as soon as possible by the governor. A floor check is the House’s conclusive evidence for figures. The Constitutional Bench referred to Article 164(2) which requires the “Council of Ministers to be collectively responsible to the State Legislative Assembly”. The Bench understood that the actual majority test is taking place not in the Raj Bhavan, but on the House floor.