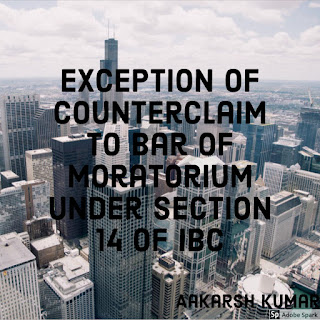 The Delhi High Court in the case of SSMP Industries Ltd. v Perkan Food Processors Pvt.  Ltd., has held that moratorium under Section 14 of the Insolvency and Bankruptcy Code, 2016 will not bar trial of suit by the corporate debtor and a counter-claim in such suit if issues and facts are both intertwined. In this case the plaintiff had instituted a suit for recovery and the defendant, in the same suit, made a counterclaim. In the intervening period of time, plaintiff’s company went into insolvency.

Issue
The issue that arose before the Delhi High Court was whether the counterclaim of the defendant in response to plaintiff’s claim would be hit by the Section 14 of the Insolvency and Bankruptcy Code. The question had arisen as to whether the adjudication of the counterclaim would be liable to be stayed in view of the Section 14 of the Code. While many of the issues surrounding the moratorium’s applicability have been solved with the help of judicial proceedings but the position of applicability of moratorium to suits involving counter claims was yet to be settled.
What Is Moratorium?
Section 14(1)(a) states: “the institution of suits or continuation of pending suits or proceedings against the corporate debtor including execution of any judgment, decree or order in any court of law, tribunal, arbitration panel or other authority;” It lays down the provision of moratorium period which prohibits the institution, or continuation of pending suit, or proceedings of any court, or tribunal, against the corporate debtor and the purpose of this provision is to keep the corporate debtor’s assets together during insolvency resolution process. It is valid till the conclusion of insolvency resolution process i.e. till the time of approval of the resolution plan by the adjudicating authority. The motive of the provision of moratorium is to protect the corporate debtor from further liability since every claim needs to be put together before the resolution professional.
Is Sec. 14(1) (a) of IBC An Absolute Bar?
On a plain reading of the provisions of Section 14(1) (a) of the Code, it appears to be a complete bar against the institution or continuation of suits or any legal proceedings against a corporate debtor on the declaration of moratorium by the adjudicating authority. But in the case of Power Grid Corporation v Jyoti Structure Ltd., (2018) 246 DLT 485, the NCLAT opined that all proceedings against the corporate debtor are not barred by the Section 14 of the IBC. It was held that “until and unless the proceeding has the effect of endangering, diminishing, dissipating or adversely impacting the assets of corporate debtor, it would not be prohibited under Section 14(1) (a) of the Code.” Further, in the case of Canara Bank v Deccan Chronicle Holdings Limited, Company Appeal (AT) (Insolvency) No. 147 of 2017, an exception was carved out which stated that moratorium will not affect any proceedings initiated or pending before Supreme Court under Article 32 of the Constitution of India or where an order is passed under Article 136 of the Constitution of India. It was further held by the NCLAT that the rule of moratorium under Section 14 of the IBC will not affect the powers of any High Court under Section 226 of the Constitution of India.
Analysis Of The Position On Counter Claim
On a strict reading of Section 14(1) (a), it can be inferred that counter-claims would be covered by moratorium. A counter claim would be a proceeding against the corporate debtor. However, in the case of SSMP Industries Ltd v Perkan Food Processors Pvt. Ltd., the counter claim raised against the corporate debtor, i.e. the plaintiff, is integral to the recovery sought by the plaintiff and is related to the same transaction. And hence, bar of moratorium shouldn’t apply to the present case. The counter claim was not an independent claim, the claim was in the nature of a set-off and it was interlinked with the claim of defendant. In the case of Jharkhand Bijli Vitran Nigam Limited v IVRCL Limited & Anr., Company Appeal (AT) (Insolvency) No. 285 of 2018, the NCLAT was of the view that until and unless the counter claim is itself determined, the claim and the counter claim deserve to be heard together and there is no bar on the same in the Code. To further this stance, the court opined that, they should not adopt a ‘blinkered’ approach and apply the straight jacket formula of imposing the moratorium bar on all counter claims. The adjudicating authority should endeavour to understand whether the purpose and intent behind the imposition of moratorium is being satisfied or defeated. The court was of the opinion that sending all the suits for counterclaims back to NCLTs would defeat the purpose of the instituted suit when the counterclaim arises out of the same transaction.
The suit filed before the NCLT was a summary trial and the whole purpose of a summary trial is speedy disposal with a simplified procedure. In the present scenario, if the Delhi High court sends the matter back to NCLT because of the filed counter claim, then it would delay and complicate the process which essentially defeats the purpose of a summary trial. Resolution Professional is usually bestowed with the responsibility of determining what payment can be made towards the claims raised, subject to availability of funds. Neither the NCLT nor the Resolution professional should be burdened with the task of reckoning an uncertain and undetermined counterclaim of the defendant here.
Conclusion
Though the language of the Section 14 of the IBC appears to be broad enough to include any legal proceedings within its ambit but there are exceptions for certain legal proceedings, interlinked counter-claim being one of the exceptions, should be stayed under Section 14 of the Code. The court in the present case viewed the issue with a pragmatic consideration and allowed the proceedings to continue. Mere determination of claims would not threaten the corporate debtor of dissipation of his assets. The court proceeded with the perception that instead of placing the corporate debtor on the back foot, the proceedings may result in strengthening his position. Though, the language of Sec.14 of the Code doesn’t explicitly provide any vacuum for exceptions, but then also, the Delhi High court carved out this exception totally basing it on merits of the case and set the Pandora box open for upsurge of other exceptions depending on conducive factual scenarios.