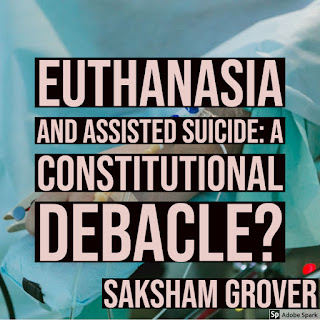 The remarkable advances in medical science and technology have always come with significant impact on the society and have brought the issues that are changing the societal norms and values. Pari Passu with these changes is the upsurge of human rights activism and freedom of choice. Therefore, there is an ever-increasing need to re-evaluate the societal as well as medical ethics and value systems.
The approach towards Euthanasia generally entail intricate legal and procedural compliance in countries across the world.  Euthanasia has been a much-debated topic throughout the world. The debate is soaring because of various developments in the field. In Netherlands, both euthanasia and assisted suicide is legal if the patient is enduring unbearable pain and there is no prospect of improvement. Belgium, Luxembourg, Canada and Colombia also allow both euthanasia and assisted suicide, though with some differences.  Every competent adult has a right to decide what should be done with his/her person. When a person ends his life by his own act, we call it “suicide” but to end a person’s life by others on the request of the deceased, is called “euthanasia” or “mercy killing”.
Concept of Euthanasia
Euthanasia can be defined as “the act or practice of killing or bringing about the death of a person who suffers from an incurable disease or condition especially a painful one, for reason of mercy.”  This is undertaken in numerous forms which have been explained as under:

The terms ‘suicide’ and ‘euthanasia’ are not inter-changeable. It is often argued that as far as a country like India is concerned, where the basic human rights are sometimes undermined, illiteracy is rampant, basic medical assistance is less and there is a high percentage of deaths due to illnesses and infections, a debate on an issue like euthanasia and assisted suicide is irrelevant.
The sanctity of life is placed at the highest pedestal in India. The right to life under Article 21 of the Constitution of India is an inalienable right and has been given a wide range of interpretation over the years. In India, the right to life  does not incorporate “right to die” as a fundamental right of a human being.
The thriving human rights regime in India had their share of impact on the social and legal dilemmas surrounding the concept of euthanasia and assisted suicide. This was followed by some conflicting and some harmonious ideologies. The question about the interpretation of Article 21 to include right to die cropped up for the first time before the High Court of Bombay in the case of State of Maharashtra v. Maruti Sripati Dubal . The Court, while striking down Section 309  of the Indian Penal Code as unconstitutional, held that right to life includes right to die as well. The Andhra Pradesh High Court in the case of Chhena Jagadesswer v. State of Andhra Pradesh  upheld the constitutional validity of Section 309 of the Indian Penal Code. Pursuant to the ideologies, the Supreme Court of India in the case of P. Rathinam v. Union of India  upheld the decision of the Bombay High Court and interpreted such a provision as “cruel and irrational” . However, the decision was overruled by a five-judge Constitution Bench which held that right to life does not include right to die.
Right to Die with Dignity: Augmented Reality
The adverse views regarding the constitutionality of euthanasia in the Indian context had been locking horns since a long time when the Supreme Court of India came up with a ground breaking judgment, sanctioning passive euthanasia on patients who are brain dead or in a permanent vegetative state (PVS).  Aruna Shanbaug, a 25 years old nurse at KEM Hospital was sexually assaulted by a ward boy, who sodomized her after strangling her with a dog chain. The assault and the asphyxiation by a chain had left her brain damaged and paralyzed. While entertaining the petition filed om behalf of Aruna, the two-judge bench of Supreme Court refused mercy killing of Shanbaug and allowed “passive euthanasia” of withdrawing life support to patients in (PVS) but rejected outright active euthanasia of ending life through administration of lethal substances. The Court also asked the Parliament to delete the related Section which penalizes “attempt to commit suicide”.
Decisively, in 2018 , the Supreme Court of India exemplified its basis of decision in the Aruna Shanbaug’s case  which permitted passive euthanasia including “involuntary” passive euthanasia but not “active euthanasia”. Upholding that Article 21 of the Constitution guarantees the “right to die with dignity”, the Supreme Court also laid down some interim guidelines for the enforcement of living wills of individuals in case of future incompetence.
Even after the endless debates regarding the ethical, psychological and legal stature of euthanasia, the definite position of it in the Indian context is inadequate. One of the biggest objections that cannot be ruled out is the misuse of the procedure. The ill use of procedure by near relatives, family members, surrogates and unscrupulous physicians is a susceptible issue that needs to be addressed. Though, as per the Supreme Court’s guidelines, an order of the High Court is mandatory to resort to passive euthanasia, this has to be comprehended practically. For instance, if a relative or a family member has an unlawful motive towards the patient, then he/she would simply retract medical care, rather than colluding and getting an order from the High Court for euthanasia. Therefore, the guidelines might not prove to be adequate. Despite all the buzz of right to freedom of choice and right to die with dignity, such a decision is one which is charged with emotion. It is not just a matter of ethics, but also involves religious and cultural dilemmas and has to be interpreted sensibly. Thus, it becomes a matter of principle for both proponents and opponents to decriminalize euthanasia and also to control intrusion by placing legislation to regulate it. A full-fledged law, keeping in mind the ethical, cultural, religious and natural sensibility of the country is need of the hour.

1 thought on “EUTHANASIA AND ASSISTED SUICIDE: A CONSTITUTIONAL DEBACLE”