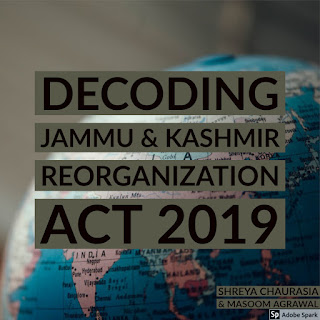 The bill was passed in Rajya Sabha on the same day of its introduction and in the Lok Sabha on 6th August, 2019. The bill received the assent of the President on 9th August, 2019. The two Union Territories will come into existence on 31st October, 2019 marking the birth anniversary of Sardar Patel.
The Government of India gave two major reasons for bifurcating the state of Jammu and Kashmir in two territories:
Some of the salient features introduced by this Act
Even on a bare reading of the present Jammu & Kashmir Reorganization Act, 2019, any layman can tell that the Act is prone to many challenges. The original Bill includes 103 clauses in total laying out all the provisions, but the Bill fails to comprehensively lay out or for that matter explain the provisions which may create disorder and chaos like situation in the application of the newly passed Act which is the guiding legislation according to which the significant Union Territories of Jammu & Kashmir and Ladakh is to be governed. It is evident that the Bill was drafted hastily without much discussions and deliberations. Interestingly enough, the Bill was passed on the same day by the Rajya Sabha (Council of States) on the day when the Hon’ble Home Minister presented it before the Upper House (Council of States), which makes it apparent of the lack of much consideration, deliberations, discussions or debates by the Members of the House in deciding the future of the most controversial and disputed territory in the history of Union of India.