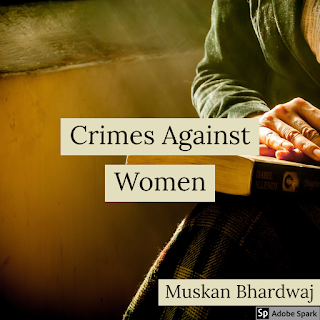 India’s development efforts have been ruined by crime against women. Worldwide at least 35 percent of women have faced either physical or non-physical violence at some point in their lives but national studies had estimated that 70 percent of women experience violence against them. Crime statistics estimated that a very large number of cases were filed under “cruelty by husband and his relatives”.
Report Of National Crime Bureau (70% of Women Are A Victim of Domestic Violence) Cases Referred:

Common forms of crime against women are domestic abuse, sexual assault, and murder. Crime against women in India is committed every 3 minutes. There was a massive increase in the number of crime rates by 44 percent from 2011 to 2015.
The most highlighted crime is “rape”. No other such crime is given much importance in media than rape. Rape is defined under the Indian penal code. In last few years some cases like Delhi gang-rape case, Scarlett Keeling Case in Goa, etc. which made international headlines. One woman is raped every 20 minutes in India according to national crime bureau. Year to year the number of cases for rape is increasing. A 7 years old girl raped and murdered in Uttar Pradesh, 12 years old girl raped and murdered in Assam, 12 years girl raped in front of her family in Uttar Pradesh and many more.

National Crime Bureau Recorded Rape in the Previous Year as Follows: Women are now more educated and are independent, which ultimately increase the record of rapes. Women are now fighting for themselves but are not getting justice because police are not giving a fair hearing and medical evidence.
(Cases Referred: Aloshia Joseph v. Rev. Dr. Joseph Kollamparambil; M.M. Haries v. State Of Kerala, Santha v. State Of Kerala.)

(Cases Referred: The State v. Ajay Bharti, Sakthivel v. state, State v. Promod)
(Cases Referred: Kans Raj v State of Punjab, Pawan Kumar v State of Haryana, K.M Sujhit v State of Kerela.)
At least 144 countries have passed laws on domestic violence. However, even when laws exist, this does not mean they are always compliant with international standards and suggestions. As far as sexual assault or sexual harassment is concerned there are 75 cases of those that are reported. And about 70,000 women are those that do not report the crime.
The unresponsive law stops the women to file the complaint against the crime. In most of the cases, police only ask women to withdraw her case and compromise with the accused. According to the latest report National Crime Bureau, it showed how the crime of rape has risen sharply by 12 percent to 15 percent and other crime against women gone up by 3 percent to 5 percent. The situation becomes worse for victims when there is a delay in judicial decision making or when the police refuse to register the case. These crime rates against women can only decrease when the due process works in to encourage awareness in protecting women’s freedom. The very living of our faith in India’s democracy rests on implementing a legal and public institutional system that actively motivates and supports the agency of women and their freedom. To ensure this, it is the duty of the police to act professionally and follow due process on matters of all crimes against women; and for lawyers and judges to turn up in court and do their jobs well.
“I wish that women in the future don’t have to go through this abuse anymore, which is our objective to build a community where people respect each other and don’t see another person as a property or a piece of meat and instead see them as a human being”.
-Raya Sarkar