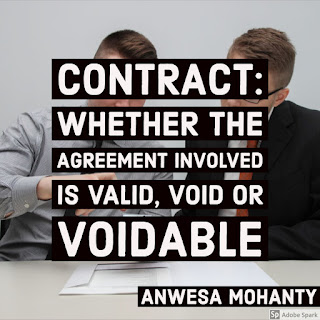 In simple words, a contract is an agreement between parties and it must be enforceable. In India, Contracts are governed by the Indian Contract Act, 1872. A contract is valid when it fulfills the conditions mentioned under Section 10 of the Act. This article focuses on the classification of the contract and whether the agreement involved is valid, void or voidable.
Introduction:
Section 2(h) of the Indian Contract Act says that a contract is “An agreement enforceable by law”.  This definition tells us about two elements of a contract. They are: there must be an agreement and it must be enforceable by law. Only then the act can be considered a contract. For example, an agreement to sell land is considered to be a contract.
Agreement:
An agreement is defined as a promise or a set of promises which form consideration for each other.  For example, X promises to deliver a Phone and Y promises to pay Rs.10000 for it. A promise is made when one party offers something and the other party accepts it. Under English law, the term “offer” is used and under Indian law, the term “proposal” is used. However, both words give the same meaning.
Valid Contract:
A contract is considered to be valid when it is consistent with the provisions mentioned in Section 10 of the Indian Contract Act.
An agreement can be considered as a contract if there exists free consent of the parties, competency of the parties to contract, a lawful consideration, lawful object, and the agreement is not void.
This definition makes us clear that a valid contract is:

Section 29 enlightens about situations where agreements are uncertain or can be made uncertain. In any such situation the agreement is void. For example, A agrees to sell B hundred tons of oil. There is nothing to show what kind of oil was intended by A. This agreement is void for it is uncertain. Section 30 of the Act declares that an agreement by way of the wager is void. Any Court will not entertain suits relating to anything alleged to be won on any wager, or entrusted to any person to abide the result of any game or any event that is uncertain. The rule provides 2 exceptions. They are:

Section 36 says that an agreement contingent upon the happening of an impossible event is void. According to Section 56 agreement to do impossible acts are void. A contract to do an act whose performance has become impossible after the contract is made becomes void.

Voidable Contract:
According to Section 2 (i), an agreement enforceable by law at the option of one or more parties but not at the option of the other or others is a voidable contract. It means the contract can be avoided by one party.
In the case of Chhanga Lal V M.C. Delhi, it was held that once an innocent party exercises his option and rescinds the contract becomes void.
According to Section 19 of the Act, when a party has consented to a contract due to force, coercion, fraud or misrepresentation the agreement is voidable at the option of the party whose consent obtained in such manner. If a party to a contract whose consent was obtained by fraud or misrepresentation is interested in the performance of the contract, he may insist that the contract shall be performed.
Article 19 A says that when a Contract is consented by undue influence, the agreement is voidable at the option of the party unduly influenced. A contract can be called to be ‘induced by undue influence’ where the relation subsisting between the contracting parties are such that either of the parties is in a position to dominate the will of the other.
According to Section 53 in cases where a contract contains reciprocal promises and one party involved in the contract prevents the other from performing his part of the promise, the contract becomes voidable at the option of the party who has been prevented.  For example, X and Y contract that Y shall execute certain work for X for a certain sum of money. Y is willing to do the work but X prevents him from doing it. The contract is voidable on the part of Y.
According to Section 55, when a contract is time-based or time is the essence of the contract, failure by one party in performing it on time is voidable at the option of the other party. A person who has himself delayed the contract cannot avoid the contract on account of his own delay.
Section 64 deals with the consequences of the rescission of a voidable contract. According to it when a person at whose option is voidable rescinds it, the other party need not perform any promise. The party rescinding a voidable contract, if he has received any benefit from the other party shall restore such benefit to the person from whom it was received.
The rescission of a voidable contract is communicated in the way revocation of a proposal is communicated.
Illegal Agreements:
The agreements which are forbidden by law are called illegal agreements. Such agreements mostly affect public policies or are criminal in nature. However, it is different from that of a void agreement.
Difference between Illegal Agreement and Void Agreement:
An Illegal Agreement is forbidden by law but a void agreement is not forbidden. A void agreement if made cannot be enforced by the Court but is not forbidden. No punishment is provided for void contract and the collateral transactions are not affected but an illegal contract is punishable and its collateral transactions are void.
In the case of Gherulal Parakh V Mahadeodas Maiya and others, it was held that void agreements cannot be equated with illegal agreements and the law may actually forbid an agreement to be made or it may refuse to enforce an agreement.
Difference between Void and Voidable Contracts:
Conclusion:
A contract, in order to be enforced and be valid, must fulfill the conditions provided under Section 10 of the Act. If the conditions are not fulfilled it either becomes a void or a voidable contract.