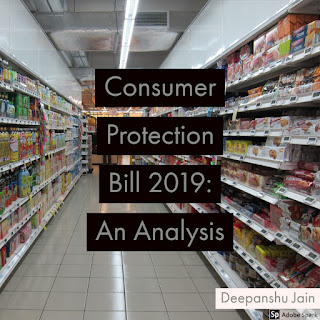 The Lok Sabha on Tuesday 30th July, 2019 passed the Consumer Protection Bill 2019. The Consumer Protection Bill, 2019 takes the Rights of the Consumer to a whole new level. The Bill seeks to wholly replace the Consumer Protection Act, 1986. In modern India as to Deal with the modern day challenges the Government of India has to come up with better and updated laws to protect the rights of the consumers. Consumer protection was not necessary when world was younger and communities were smaller but from the beginning of the industrial revolution it gave plenty of scope for Mal-practices. The industrial revolution and the development in the international trade and commerce has led to the vast expansion of business and trade, as a result of which a variety of consumer goods have appeared in the market to meet the needs of the consumers and a plenty of services have been made available to the consumers like insurance, transport, electricity, housing, entertainment, finance and banking etc.

To keep the rights of the consumers protected many legislations were enacted by the Government of India before Consumer protection Act, 1986 namely as follows: Sale of Goods Act, 1930; Essential Commodities Act, 1955; Prevention of Food Adulteration Act, 1954; Prevention of Black Marketing and Maintenance of Supplies of Essential Commodities Act, 1980; Standards of Weights and Measures Act, 1956; Agricultural Products and Grading and Marketing Act (AGMARK), 1937; Indian Standards Bureau Certification Act, 1952; MRTP Act, 1969 etc. In spite of these various Acts already enacted there was a need to bring a special act to protect the right of the Consumers, which is Act 68 of 1986 called as The Consumer Protection Bill, 1986 which was passed by Both Houses of Parliament and it received to assent of the president on 24th December, 1986. It came to the Statues Book as The Consumer Protection Act, 1986 (68 OF 1986).
The Consumer Protection Bill, 1986 seeks to provide for better protection of the interests of consumers and for the purpose, to make provision for the establishment of Consumer councils and other authorities for the settlement of consumer disputes and for matter connected therewith.Among other things. It seeks to promote and protect the rights of consumers such as-
These objects are sought to be promoted and protected by the Consumer Protection Council to be established at the Central and State level. Now after discussing Need and objectives of Consumer protection Act we further proceed to Consumer protection Bill, 2019 with it new and amended clauses and what benefit will it provide to Public at large.
Who Is A Consumer?
The definition of the consumer has evolved, with various cases like Morgan Stanley Mutual Fund v Kartik Das on 20 May, 1994 (1994 SCC), and S.P. Goel v Collector Of Stamps, Delhi on 8 December, 1995 (996 AIR 839, 1996 SCC (1) 573) having defined the term. In simple words, a consumer is any person who purchases a product and uses the product. He or she is the individual that consumes the good or service being offered for sale by the seller. Section 2(1)(d) of the Consumer Protection Act states the definition of a consumer of goods and services. It defines consumer as a person who:
According to this particular clause a person is a consumer of a good when he buys good for the considerable amount which is Paid or Promised or Partially Paid or Partially Promised. In the case of future Payment which results into failure the buyer is still be called the consumer of the goods. Any other person rather than buyer with the buyer’s permission, if he uses the goods will also fall into the category of Consumer and posses all consumer right same as to Buyer. On the other hand, when a person buys good for commercial purpose or for reselling the goods he doesn’t fall into category of Consumer and will lose consumer rights for particular goods. Laxmi Engineering Works vs P.S.G. Industrial Institute on 4 April, 1995 defines the commercial purpose.
Similar is the definition of the consumer of a service, that is intangible, where the buyer hires or avails of the service in the above-mentioned payment methods. Any other person who uses or avails the service with the permission of the buyer. However, those who avail or hire such services for a commercial purpose are not consumers same as in case of consumer goods.
The Consumer protection Bill, 2019 has many new clauses and expanded definitions which are as follows:
Central Consumer Protection Authority (CCPA)
Clause 10(1)- The Central Government shall, by notification, establish with effect from such date as it may specify in that notification, a Central Consumer Protection Authority to be known as the Central Authority to regulate matters relating to violation of rights of consumers, unfair trade practices and false or misleading advertisements which are prejudicial to the interests of public and consumers and to promote, protect and enforce the rights of consumers as a class. This clause seeks to establish a national level regulator- Central Consumer Protection Authority to deal with the consumer complaints on a proactive measure. The present law does not have a regulator. The District Collector is empowered to report to the CCPA regarding mass consumer complaints in the concerned jurisdiction.Clause 16 of the Bill states power of District Collector as The District Collector (by whatever name called) may, on a complaint or on a reference made to him by the Central Authority or the Commissioner of a regional office, inquire into or investigate complaints regarding violation of rights of consumers as a class, on matters relating to violations of consumer rights, unfair trade practices and false or misleading advertisements, within his jurisdiction and submit his report to the Central Authority or to the Commissioner of a regional office, as the case may be.And the powers and functions of central committee are mentioned in clause 18 of Bill.
Misleading Advertisement
The Bill contains provisions to deal with misleading advertisement which is defined under Clause 2(28).Misleading advertisements can attract penalty up to rupees ten lakhs from the CCPA under Clause 21.It is also an offence punishable with imprisonment for a term which may extend to five years and with fine which may extend to fifty lakh rupees as per Clause 89.
Clause 2(28)-“misleading advertisement” in relation to any product or service, means an advertisement, which –

The Bill addresses liability of Endorsers which is defined under clause 2(18). The endorser can be levied with penalty up to rupees ten lakhs by the CCPA for false and misleading advertisements, under Clause 21.However, the endorser will not be liable if he has exercised due diligence to verify the authenticity of the product which is being Endorsed by him.
Product Liability
The Bill includes a Special Chapter (Chapter VI) to deal with ‘Product Liability’. CLAUSE 2(34)- “product liability” means the responsibility of a product manufacturer or product seller, of any product or service, to compensate for any harm caused to a consumer by such defective product manufactured or sold or by deficiency in services relating thereafter.
In the above-mentioned clause the word ‘harm’ has a wider aspect which can be understood in Clause 2(22)- “harm”, in relation to a product liability, includes-
(i) damage to any property, other than the product itself;
(ii) personal injury, illness or death;
(iii) mental agony or emotional distress attendant to personal injury or illness or damage to property; or
(iv) any loss of consortium or services or other loss resulting from a harm referred to in sub-clause (i) or sub-clause (ii) or sub-clause (iii), but shall not include any harm caused to a product itself or any damage to the property on account of breach of warranty conditions or any commercial or economic loss, including any direct, incidental or consequential loss relating thereto;
But it will not include any harm which caused on the account of Breach of warranty conditions or any commercial or economic loss, including any direct, incidental or consequential loss relating thereafter. Also a action of product liability may be brought up against the seller by a person for any harm caused to him by the product. There are certain circumstances like seller exercising substantial control over designing, packing, testing, manufacturing etc, or seller altering or modifying the product.The seller will also be liable if he failed to exercise reasonable care in assembling, inspecting or maintaining such product or he did not pass on the warnings or instructions of the product manufacturer regarding the danger involved or proper usage of the product while selling such product.
Expanded Definition of Deficiency
The Bill expands the definition of ‘deficiency’ in CLAUSE 2(11) to include-
“deficiency” means any fault, imperfection, shortcoming or inadequacy in the quality, nature and manner of performance which is required to be maintained by or under any law for the time being in force or has been undertaken to be performed by a person in pursuance of a contract or otherwise in relation to any service and includes-
(i) any act of negligence or omission or commission by such person which causes loss or injury to the consumer; and
(ii) deliberate withholding of relevant information by such person to the consumer.
New Area Of Jurisdiction
The limits of Jurisdiction has been expanded in the following manner –
(i) District Forum – Rs. One Crore from Rs. Twenty Lakhs.
(ii) State Commission – Rs. Ten Crores from Rs. One Crore,
(iii) National Commission – Above Rs. Ten Crores from Rs. One Crores.
The sole reason of this Bill is to provide for protection of the interests of consumers and for the said purpose, to establish authorities for timely and effective administration and settlement of consumers’ disputes and for matters connected therewith or incidental thereto.