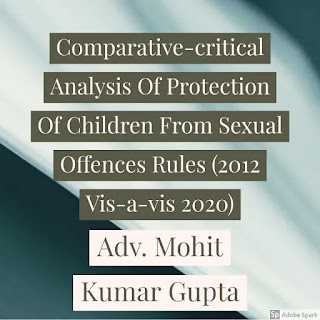 On 9th March 2020, The Ministry of Women and Child Development, Government of India has notified the Protection of Children from Sexual Offences (POCSO) Rules, 2020 in the exercise of the powers conferred under section 45 of the POCSO Act, 2012, and the current rules were amended to strengthen the process of POCSO Rules in order to cure the inherent defects, voids, and expected deficiencies/difficulties and to bring the same in line with the changes brought in corresponding laws of the land.

The current amendment has repealed the POCSO Rule 2012 which had in force till the date of notification of the present rules, but close scrutiny of the same would reveal the following key areas of consideration, in order to effectively understand the purpose and rationale of amendments so carried in terms of filling gaps or curing defects:
1. Awareness generation and capacity building (Rule 3): This newly added rule focusses on ‘age-appropriate’ IEC (Effective information, Education and Communication) material and curriculum for children, the material thereof shall be made available by the concerned government which is a welcoming step for the reason that legal literacy embedded therein needs to be conveyed according to the cognitive development of children and their receptivity in terms of understanding and actual follow up & implementation, in light of mandatory reporting of offences. This rule, though provides for police verification and background check as mandatory for employees of institution housing children, has somehow left all such persons coming in contact with children but who are not employees of such institution. The same also leaves a void in terms of providing periodic training to such employees on child safety and protection.  However, what is not prohibited nor mandated, can be proactively initiated by such institutions in the larger interest of children. The child protection policy may include the above suggestion and be implemented forthwith. The government’s training programme as termed ‘periodic’ should mean regular training programmes at specified intervals, on the same lines as mentioned in the sub-rule 6 ‘on a regular basis’.
2. Procedure regarding care and  protection of the child (Rule 4):
3. Interpreters, translators, special educators, experts and support persons (Rule 3(6)/5 (7)/(8): The amendments are carried out since the JJ Act was amended in the year 2016 and notified therewith. A notable feature of added sub‐rule is the payment of fees to professionals like an interpreter, Support person, etc. at or above the payment prescribed for skilled workers under the Minimum Wages Act. Dedication and ordinary work in ordinary circumstances as per the requisite standards can be expected now, barring few positive aberrations depending upon the individuals.
4. Medical aid and care Rule 6(1)/(5)/(7)/(8)/(9)/5(1): The amended rule with respect to the time limits i.e. from ‘but not later than 24 hours of receiving such information’ to ‘within 24 hours of receiving such information’ is only to bring the rule in conformity with Section 19(5) of POCSO Act, however the same very well excludes the urgency implanted, as to be exercised through the due application of mind case to case, through the use of words ‘as soon as possible’. Newly added sub‐rules ensure further safeguards and impose obligations on medical practitioners qua submission of report within 24 hours, child pregnancy and termination, drug deaddiction and measures for divyang children,  although the same was ensured selectively under the earlier notified regime.
5. Legal aid and assistance (Rule 7): Section 40, POCSO Act has been given effect by recognizing the Legal Service Authority to mean DLSAs so as to end the multiplicity of stakeholders representing child victims. Only in the absence of a private lawyer being engaged for or on behalf of the victim/complainant, the Legal Services Authority shall compulsorily render appropriate legal aid and assistance.
6. Special relief (Rule 8): The cloud of confusion ranging for or in respect of payment/reimbursement of expenses incurred for contingencies has been taken care of under these newly added sub‐rules. No priority or seriatum mention has been made and any authority, found expedient, case to case shall be recommended with an appropriate description of such contingencies by the CWC.
7. Procedure for imposition of fine and payment thereof (Rule 10): The CWC shall coordinate with the DLSA to ensure that any amount of fine imposed by the Special Court under the Act which is to be paid to the victim, is in fact paid to the child. Although the sub‐rule is enabling, however, it may undermine or duplicate the mandate of the DLSAs. But, as experienced through past practice, deficiencies felt at the level of DLSAs, are being attempted to be taken care of.
8. Reporting of pornographic material involving a child (Rule 11): The mandate of Section 15 of the POCSO Act has been enlarged in consonance with Section 19 thereof, for the purpose of bringing the information with the knowledge of SJPU or local police for taking necessary action. The significant rule provided herein is the mandate imposed upon the intermediaries like internet search engines, social media web portals, etc. to supply all information, even consisting of the source from which such material, constituting an offence, may have been originated, at its own pursuant to compliance of Section 19 of POCSO Act. The governments are impressed upon to create awareness, particularly among business entities as such, in this regard.
9. Monitoring of implementation of the Act (Rule 12): The NCPCR or SCPCR, have been imposed further functions in addition to the functions assigned under the Commissions for Protection of Child Rights Act, 2005. Most notable, are a collection of statistics/ data particularly regarding timeframes and calling for a report on a specific case falling within the jurisdiction of a CWC. However, the term ‘child sexual abuse’ should not have been used as it renders the purpose of perfunctory and non‐exercisable. The NCPCR or SCPCR is required to use the information so collected for assessment qua implementation of the provisions of the act and shall be duly reported in the annual report. However, parallel work areas of NCPCR and SCPCR are needed to be streamlined.

Conclusion
The said amended rules are focusing on the aspect of prevention, protection, and rehabilitation. The amendment was made to strengthen the implementation of the POCSO act. The very sorry state of legislative affairs is that majority of the times, legislations only focus upon the punishment and the investigation while rest of the issues such as prevention, protection, and rehabilitation always take a back seat. However, in the amended subordinate legislation, more weight has been assigned to the awareness and capacity building with the inclusion of mandatory police verification of all the institution housing/ caring for children along with the age-appropriate IEC material, besides immediate medical relief, the procedure regarding care and protection of the child, legal aid, special relief, reporting of pornographic material involving a child and monitoring of the implementation of the Act was particularly included.