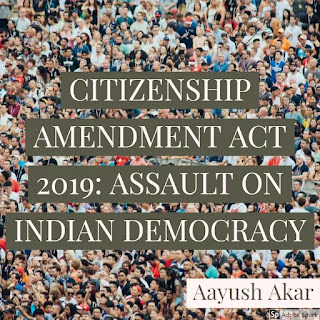 India recognizes an individual as a citizen by virtue of birth, descent, registration, and naturalization pursuant to the Citizenship Act of 1955, which takes effect from Part II of the Constitution, namely Articles 5 to 9. Under the previous regime, the Citizenship Act was amended 5 times i.e. in the years of 1986, 1992, 2003, 2005 and 2015. Another amendment was broached by the current Modi Government which triggered protests all around the country. The amendment made by the Government of India to the Citizenship Act of 1955 is being hotly debated throughout all platforms. The advocates of the Citizenship (Amendment) Act, 2019 (CAA) have vigorously argued in favor of its constitutionality as well as its importance, thus ignoring all apprehensions and concerns relevant to its possible detrimental impact on the country and its people.[1]