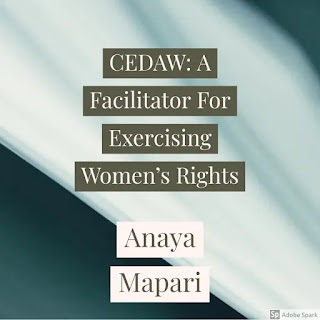 Women empowerment and upliftment has been a major issue of social activism as well as a subject of conflict in many parts of the world. Even if we call our society a developing one, gender inequality and discrimination are still prevalent in most communities around the world. Take India for instance. The orthodox Indian society did not empower women enough to make them independent. They were confined to their own selves physically as well as mentally. But today, as the society is changing from quintessentially male-dominated communities to a more balanced setup, women are being treated equally to the men. By providing women with some special rights, international organizations like the United Nations’ CEDAW are empowering females to create a balanced and more developed society.

The United Nations has worked extensively towards the development of women. The UN Charter itself states that the UN is determined to provide equal rights to women and also to work towards the betterment of the people.
In the UN Charter, Articles 1, 8, 13 and 55, and in the Universal Declaration of Human Rights (UDHR), Articles 1 and 2 respectively talk about women’s rights and the upliftment of women. Whereas, in the Indian Constitution, Article 14 talks about Equality before Law, Article 15 talks about the Prohibition of Discrimination on the grounds of Religion, Race, Caste, Sex, and Place of Birth. Article 15(3) specifically talks about Special Status to Women and Children through Reservations. Lastly, Article 16 talks about Equal Opportunities to everyone- males as well as females. This provision in the Indian Constitution does not talk about women empowerment per se, but it focuses more on equal opportunities for all the citizens with regards to employment and holding any official position in the government.
About CEDAW
CEDAW stands for Convention on the Elimination of all Forms of Discrimination Against Women. It was adopted in 1979 by the United Nations General Assembly and enforced on 3​rd​ September 1981. It is described as the International Bill of Rights for Women.
The history of CEDAW goes as follows:
Objectives of CEDAW
Provisions of CEDAW
There are 30 articles in total which are included in the Convention. These articles are categorized into 3 groups, where each group talks about a specific aspect of the Rights of Women.
Articles 1 to 16: Talk about the economic, social, political, cultural and national rights of women and girls. It also talks about certain policies regarding the freedom of women and the prevention of action with respect to gender stereotypes. The Convention also covers a guarantee of these rights as well as gives rights to women to represent their respective societies at an international platform.
Articles 17 to 22: Provision regarding the ratification of CEDAW by various governments in order to end discrimination against women.
Articles 23 to 30: It mentions how the UN and the various governments should work in harmony to make sure that the rights are protected.
1: Definition of Discrimination
2: Policy Measures
3: Guarantee of Basic Rights and Freedoms
4: Special Measures
5: Roles in Stereotypes
6: Trafficking and Prostitution
7: Political and Public Life
8: Participation at International Level
9: Nationality
10: Education
11: Employment
12: Health
The Optional Protocol To CEDAW: (OPCEDAW)
There is an Optional Protocol to the CEDAW Committee, which was adopted by the United Nations General Assembly in 1999. This protocol is abbreviated by the name OPCEDAW.
It includes all the provisions which are not fully covered in the actual set of articles of the Convention. OPCEDAW is an international document that is like a branch of CEDAW.
This document gives women and girls the right to file a complaint if their rights are violated. This document also includes the methods and privileges of certain governing bodies to carry out investigations regarding several heinous crimes which in turn lead to injustices.
Article 2 provides communication to be made to the committee, either individually or in a group. However, the committee accepts these complaints if they are NOT made anonymously. Sometimes, it so happens that a woman is afraid to file a complaint against her family, especially her husband and in-laws if she is being tortured, only because she thinks that they might not spare her if at all the complaint is rejected. The committee believes that the complainant should specify her personal details as well as the defendant’s, to seek justice quicker and make the defendant face punishment as soon as possible.
There are no domestic remedies or examined complaints under the CEDAW Committee. A complaint is admitted only if it is compatible with the provisions of CEDAW. Meaning, if the nature and subject of the complaint fall under any provision of CEDAW, only then will it be taken under consideration. To present a written statement of a certain complaint, the committee gives the complainant and the respective authority 6 months to form an official document and submit it. If the time period extends beyond 6 months, the complaint will not be considered for appeal and other legal proceedings.