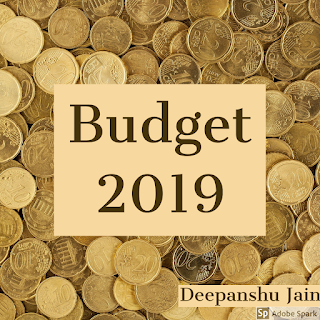 What is a Budget?
A budget is a formal statement of estimated income and expenses based on future plans and objectives. In other words, a budget is a document that management makes to estimate the revenues and expenses for an upcoming period based on their goals for the business.

The Union Budget of India also referred to as the Annual Financial Statement in Article 112 of the Constitution of India, is the annual budget of the Republic of India. The Government presents it on the first day of February before the beginning of the new financial year in April. Until 2016 it was presented on the last working day of February by the Finance Minister of India in Parliament. The budget, which is presented by means of the Finance bill and the Appropriation bill has to be passed by Lok Sabha before it can come into effect on April 1, the start of India’s financial year.

Union Budget 2019 has many Interesting facts with its own Pros & Cons. For the first time in history, the Union Budget was presented by First full-time Women Finance minister of India Nirmala Sitharaman. Every time we see Budget is kept in a Briefcase for the first time is wrapped in Red colored Cloth with State Emblem of India to be called Bahi-Khata by the Ministry of  Finance.

In the interim budget exemption for people earning up to Rs.5 Lakhs p.a. so there was a hope that slab would increase up to 8 Lakhs but union budget 2019 appears to be a different thing. And current effective slabs are 5% tax on Income between 2.5 Lakhs to 5.0 lakhs, 20% tax on Income between 5.0 lakhs to 10 lakhs and 30% on income above 10 lakhs. This Budget does not bring a smile on faces of Lower and Middle-class people but also does not put a burden on them but for the Higher class rate has been increased. Every time the Budget is presented everyone wants to know what will become cheaper and what will be cost more to their pocket, let us have a look at this:-

Following is a list of items that will become costlier and cheaper:

What will become Costlier?

What will become Cheaper?

The Budget is presented by the Now Finance Minister Ms. Nirmala Sitharaman. In her speech of 2 Hours 14 Minutes longest ever in the History, she discussed major Highlights which are as follows:-

The focus of the government is on FDI (foreign direct investment) in Aviation, Media and Finance sector. In the corporate sector, the companies up to turnover of Rs.400 corers have to pay 25% corporate tax earlier which was Rs.250 corer. Also, a surcharge (additional tax) of Rs.1 levied on Petrol & Diesel. Talking about GST the Taxpayers having an annual turnover of less than Rs. 5 corers can now file quarterly returns.