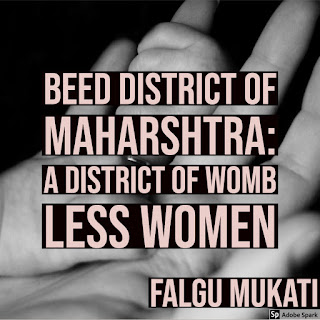 “Violence against women in all its forms is a human rights violation. Its not something that any culture, religion or tradition propagates.”
Beed is a small drought affected district located in the state of Maharashtra. Due to drought almost throughout the year the people living in an around Beed district migrate to Western Maharashtra which is the sugar belt. Every year from October/November till March the people migrate in search of job as cane cutters. The husband and wife are considered as one and are paid for the total amount of sugarcane cut by them together. The contractors pay on the basis of tonnes of sugarcane cut. For any off taken they are heavily penalised by the contractors. Thus, it becomes difficult for the couple to take an off for even a day. No matter how ill they maybe they resist from taking an off due to the fine which they have to pay.
Menstruation is an inevitable part of a woman’s life. However, during menstruation women suffer from certain problems such as weakness, menstrual cramps, backache and much more. Also, during menstruation, it is advised that the women should not strain themselves, and rest as much they can. But the villagers who migrate to the western part of Maharashtra in search of work have no proper place to stay. Thus, they are forced to stay in areas near the fields or in tents near the sugar mills. These places do not have proper hygienic sanitation facilities. Thus it becomes difficult for women during menstruation. Unhygienic sanitation facilities lead to various infections, especially during menstruation. Lack of appropriate rest during these days can lead to tiredness, but since they have a target to complete during the day taking rest for few hours is not possible. The women thus face many problems while working during menstruation.
As a result, many women are indirectly forced to undergo hysterectomy. Hysterectomy is a process whereby the uterus of a woman is removed via a surgery. Hysterectomy is done only when there is fibroid, endometriosis, cancer, uterine prolapse or some other problem which cannot be treated through medicines. However, the percent of unnecessary or illegal hysterectomy is very high in Beed district of Maharashtra. Once the uterus is removed a woman no longer menstruates, which means that she can work more without suffering from any of menstrual pain. The cost of hysterectomy is high thus the contractors lend money to them for the surgery and later recover from their wages. Although as per the Indian constitution the marriageable age for women is 18 but yet the law is violated and  many girls as young as 12 to 14 are married all over the country, so is the case in the Beed District. Once they are married within a few years they have three to four children and thereafter they undergo hysterectomy. According to them once they have few children there is no use of the uterus and therefore, they agree for the surgery. Undergoing this surgery means that they will now be able to work more and in turn earn more.
Intense work in the fields is bound to cause problems to women such as abdominal pain and other problems, but the doctors suggest the women to undergo hysterectomy even when it can be cured by simple medications. Many women undergo such a surgery in order to get away with the problems related to menstruation since they cannot afford a day’s rest. Many of the innocent villagers are scared by the doctors that if they do not undergo the surgery then in future it will lead to cancer. The illiterate villagers who do not understand the medical terms do as the doctors ask them and thus undergo the process of hysterectomy at an age as young as 19 to 22. Many girls at a tender age thus get their uterus removed.
According to a recent study conducted by the Maharashtra State Commission for Women states that 36 percent of women in Beed District undergo hysterectomy. According to the National Family Health Survey the rate of hysterectomy in Maharashtra is only 2.6 percent and only 3 percent all over India. This shows that there is a sharp contrast in the rate of hysterectomies done in one single district and the ones done all over the country.
Sexual exploitation of women is very common and an increasing crime all over the world. It is also one of the causes of increased hysterectomies among the women in the Beed district of Maharashtra. The mukadams or the contractors often sexually exploit women workers. This leads to a fear of pregnancy and thus women feel it safe to undergo hysterectomy after the birth of three to four children.
Though hysterectomy is viewed as a solution to get away with the menstrual problems but it has its own side effects. The main long-term side effect is severe abdominal pain, backache, and problem in lifting heavy weights. Since women undergo this surgery at a very young age, they face these problems in the their early 30’s which worsens later. As per a survey conducted it was found that around 13,861 women had undergone hysterectomy in the past decade. Thus the Beed District is commonly known as a “District of Womb less Women.”