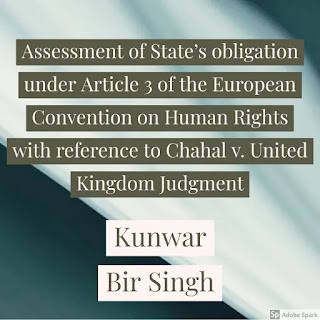 Introduction
The obligations of the state parties to the regional human rights instruments are similar and include duties of abstention and of action. The European Convention requires state parties to ‘secure’ to everyone within their jurisdiction the guaranteed rights (Art.1). In an era when privatization and de-regulation have been common, regional tribunals have had to ascertain what conduct can be attributed to a state, to which state it should be attributed, and whether or not that conduct breaches a right guaranteed by the relevant regional instrument. The law of the state responsibility holds a state responsible only for its acts or omissions in breach of an international obligation. States thus are not responsible for the wrongful conduct of private parties, as such, but acts will be attributed to the state if it is complicit in or condones the private wrongdoing. The problems of attribution are even more difficult when the conduct relates to historical injustices and efforts to remedy them.
Background
Since the partition of India in 1947 many Sikhs have been engaged in a political campaign for an independent homeland, Khalistan, which would approximate to the Indian province of Punjab. In the late 1970s, a prominent group emerged under the leadership of Sant Jarnail Singh Bhindranwale, based at the Golden Temple, in Amritsar. The government submits that he has been using the temple premises for the accumulation of arms and has been advocating the use of violence for Khalistan. Since, 1984, the conflict in Punjab has claimed over 20,000 lives, peaking in 1992. On 1st January 1984, Mr. Karamjit Singh Chahal traveled to Punjab with his wife and children to visit relatives. He submits before the court that he attended at the Golden Temple and saw Sant Bhindranwale. At around that time Mr. Chahal was baptized and began to adhere to the tenets of orthodox Sikhism. He also became involved in organizing passive resistance in support of autonomy for Punjab. On 30 March 1984, he was arrested by the Punjab Police but somehow he was able to return to the UK on 27 May 1984.
Mr. Chahal’s political and religious activities in the United Kingdom
On his return to the United Kingdom, Mr. Chahal became a leading figure in the Sikh community, which reacted with horror to the storming of the Golden Temple. He met Jasbir Singh Rode, who was Sant Bhindranwale’s nephew. In October 1985 Mr. Chahal was detained under the Prevention of Terrorism Act 1984 on suspicion of involvement in a conspiracy to assassinate the then PM of India Rajiv Gandhi, during his official visit to the United Kingdom. He was released for the lack of evidence. In March 1986 he was charged with assault and affray following disturbances at the East Ham gurdwara in London.
Deportation and Asylum Proceedings
On 14th August 1990, the Home Secretary decided that Mr. Chahal ought to be deported because his continued presence in the United Kingdom was unconducive to the public good for reasons of national security and other concerns of political nature, namely international fight against terrorism. Mr. Chahal claimed that if he returned to India he has a well-founded fear of persecution within the terms of the United Nations 1951 Convention on the Status of Refugees. Because of the national security elements of the case, there was no right in his hand of appeal against the deportation order. He was served with the deportation order on 29 July. On 9th August 1991, he filed for judicial review of the order. The Home secretary reasoned and considered that the breakdown of law in Punjab was due to the activities of the Sikh terrorists and was no evidence of persecution within the terms of the 1951 convention.
Alleged violation of Article 3 of the Convention
Article 3 enshrines one of the most fundamental values of a democratic society. The court is well aware of the immense difficulties faced by states in modern times in protecting their communities from terrorist violence. However, in these circumstances, the Convention prohibits in absolute terms torture or inhuman or degrading treatment or punishment, irrespective of the victim’s conduct. Unlike, most of the substantive clauses of the Convention, Article 3 makes no provision for exceptions and no derogation from it is permissible under Article 15 even in the event of public emergency threatening the life of the nation. In determining whether it has been substantiated that there is a real risk that the applicant if expelled to Indi, would be subjected to treatment contrary to Article 3, the court will assess all the material placed before it and. If necessary, material obtained of its own motion. Furthermore, since the material point in time for the assessment of risk is the date of the Court’s consideration of the case, it will be necessary to take account of evidence that has come to light since the Commission’s review. The court did take notice of the Government’s comments relating to the material contained in the reports of Amnesty International. Nonetheless, it attaches weight to some of the most striking allegations contained in the reports, particularly with regard to extrajudicial killings by the Punjab police and the action taken by the SC of India. The court got persuaded by the fact that the Punjab police were accustomed to act without regard for human rights. Moreover, the court found that there is no concrete evidence to show that there has been some improvement in the organization of the Punjab police. This was the reason the court held unanimously that sending or deporting the applicant back to India would constitute a violation of Article 3 of the European Human Rights convention.
Conclusion
Each State Party to the any Covenant undertakes to take steps, individually and through international assistance and co-operation, especially economic and technical, to the maximum of its available resources, with a view to achieving progressively the full realization of the rights recognized in the present Covenant by all appropriate means, including particularly the adoption of legislative measures. Every state tries to uphold this since they are obligated by the convention to which they are a party.