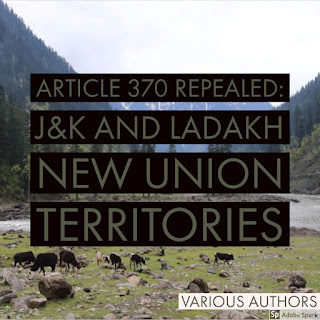 Home Minister Mr. Amit Shah on Monday 5th August, 2019 on the advice of Honourable President of India Introduced Bills in Rajya Sabha for Revocation of Article 370 and Article 35A, which grants special status to State of Jammu and Kashmir. Starting from history of Article 370 and 35A to the present situation a lot have to be discussed. Both Articles have a huge history. After the Formation of Modi Government in 2019 at Central the 1st Session of Parliament in ongoing, this extended session had already passed more than 14 Bills and today Four new Bills were introduced Two of them were to Scrap Article 370 and Article 35A. The BJP has been opposing the Special Status of J&K from a long time. It had claimed that it could not Repeal Article 370 during the Government of Mr. Atal Bihari Vajpayee due to lack of majority in the Lok Sabha, BJP has been opposing it since Jan Sangh Days. In the manifesto of 2014’s election one of the party’s Agenda was: Return of Kashmiri Pandits to the land of their ancestors with full dignity, security and assured livelihood.