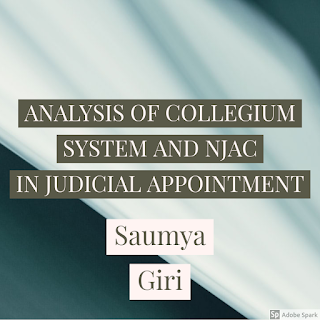 (i) In this system of appointment of Judges, the collegium will recommend the names of the candidates to the Central Government.
(ii) Also, the central government will send the names of the proposed candidates for consultation.
(iii) The appointment process takes a long time since there isn’t a fixed time limit for it. If the Collegium resends the same name again then the government has to give its assent to the names.
The Collegium System faced a lot of criticism not only from the government but also from civil society due to its Lack of Transparency and Accountability.
This led to the 99th Constitutional Amendment Act, 2014 the National Judicial Commission Act (NJAC) to replace the collegium system for the appointment of judges.
National Judicial Appointment Commission
The parliament passed the 121st Constitutional amendment Bill 2014 with a view to replacing the collegium system with regard to the appointment of judges. The bill seeks to enable equal participation of judiciary and executive to ensure the appointment is more participatory, transparent, and objective. The bill amends Article 124(2) of the Constitution to provide a commission to be known as the National Judicial Appointment Commission (NJAC).
1. Composition of NJAC
The NJAC consists of six members – Chief Justice of India as a chairperson, two senior-most judges of the Supreme Court, Union Minister of law and Justice, two eminent personalities (to be nominated by a committee consisting of Chief Justice, Prime Minister and leader of opposition in Lok Sabha). Of these two eminent persons, one person would be from SC/ST/OBC or minority community, or a woman, and they are to be nominated for a period of three years and shall not be eligible for re-election.

3. NJAC Struck Down as Unconstitutional

The validity of NJAC was challenged before the Supreme Court in Supreme Court Advocates-on-Record v. Union of India.  In a landmark judgment, a five judge’s bench of Supreme Court by 4:1 majority struck down the 99th Constitutional amendment held it to be ultra vires to Constitution and that it sought to interfere with the independence of the judiciary, of which appointment of judges and primacy of the judiciary in making such appointments was indispensable.
Justice J. Chelemaswar in his dissenting opinion stated that the ever-rising pendency of cases warranted a “comprehensive reform of the system” and upheld the validity of NJAC.  Also, that primacy of the Chief Justice is not in the basic structure of the constitution, and the judiciary’s power over appointments was not the only means for the establishment of an independent and efficient judiciary.
The key Holding of the Judgment:
(i) Judicial appointments being an integral facet of judicial independence are part of the basic structure.
(ii) Judicial primacy in judicial appointments with executive participation is also the part of basic structure.
(iii) The collegium allows for executive participation by maintaining the judicial primacy through the collegiums.
(iv) The NJAC violates the basic structure by doing away with judicial primacy through its veto provisions.
Justice Khehar provides five reasons, backing the second judge’s case:
1.  That judicial primacy in appointment was repeatedly accepted.
2. That collegium does not violate the Constitutional scheme by effacing the participation of the executive since the President acting on the aid and advice of the council of ministers can still object to recommend names provided his vision and so on.
3. In the constituent assembly debates, judicial appointments were specifically discussed in the context of judicial independence, making it clear that the Constitutional scheme regards the appointment of judges as an integral part of judicial independence.
4. In the constituent assembly debates, while the word consultation was being discussed, Dr. Ambedkar clearly stated that it was intended to curtail the will of the executive. Dr. Ambedkar was hesitant about giving a complete veto to one individual- the Chief Justice of India. The collegium achieves the desired balance between the two positions, by placing primacy in the hands of judges.
5. Consistent practice since independence allowed the Chief Justice of India, the final say in judicial appointments.
Conclusion
Whatever it be called – JUDICIAL ACTIVISM OR JUDICIAL OVERREACH, striking down of NJAC has added another chapter in the controversy for the appointment of judges to the higher judiciary in India. It is firmly believed that for securing independence and objectivity of the judiciary it is necessary that judges be selected on merit and political elements should be reduced in the process of selection of judges. Thus, a balance needs to be struck between the collegium system and the proposed commission for the appointment process.
References
[1] M.P. Jain, ‘Indian Constitutional Law’, 5 ed. 192, Wadhwa and Co., Nagpur, (2007).
[2] V.N. Shukla, ‘Constitution of India’, 11 ed. 473, Eastern Book Co. Lucknow, (2011).
[3] INDIA CONST., Art. 217 (1).
[4] INDIA CONST., Art. 124 (2).
[5] S. P. Gupta v. Union of India, A.I.R. 1982 SC 149
[6] Supreme Court Advocate-on-Record Association v. Union of India, A.I.R. 1994 SC 268.
[7] Re: Presidential Reference, A.I.R. 1999 SC 1
[8] A. K. Vishwakarma, National Judicial Appointment Commission Bill, 2014: Re-Casting the Debate on Independence of Judiciary, Civil, and Military Law Journal, Vol. 51, No.1, 44, January-March 2015.
[9] The National Judicial Appointment Commission Act, 2014, Section 5.
[10] The National Judicial Appointment Commission Act, 2014, Section 6.
[11] Supreme Court Advocates-on-Record Association and Anr .Vs. Union of India (Supreme Court), Writ