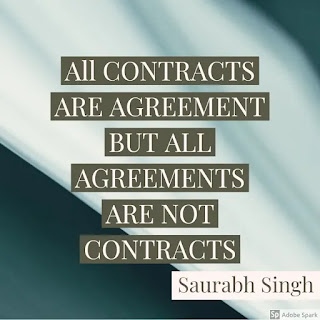 A statutory contract means a contract of the contents of which some portion is filled under a statue. [1] And Agreement is the meeting of minds or a mutual understanding between two or more persons about their reciprocal rights and duties regarding past or future performances. An agreement is the basis of a contract and contract is the structure constructed on these bases. An agreement starts from an offer and ends on consideration while a contract has to achieve another milestone that is enforceability. Later in the article, we will understand the relation and bifurcation of contract and agreement.
Agreement
An agreement is defined as “Every promise and set of promises, forming the consideration for each other, is an agreement” in section 2(e) of the Indian Contract ac Act, 1872. When a proposal is made by one party and the same is accepted by another party, it becomes a promise and when this promise is with some consideration by any of the parties is an agreement.
Elements of Agreement
There are four elements necessary for forming an agreement: