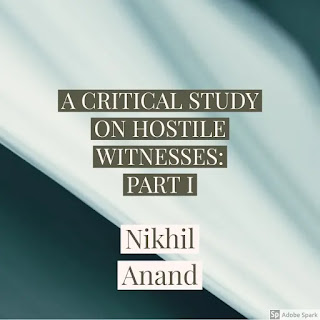 Abstract
The word ‘evidence’ comes from the Latin word evident-, meaning “obvious.” because the evidence is critical proof in linking someone to a criminal offense. A witness is an integral part of the criminal justice system. The article is anxious with the contemporary development of Evidence Law. A witness is the eyes and ears of justice. It is through witnesses and documents that pieces of evidence are placed before the court. This paper while reflecting on the rules of evidence as a part of the procedure seeks to analyse and assess, the hostile witnesses and the reasons for turning to hostile witnesses.
Introduction
In today’s life, the view of witnesses turning hostile is quite easy and very useful for many parties in dealing with it.  The best part played by the witnesses to justice is they should first be confessed or recorded under the magistrate and then any modern way to the criminal justice system since the conclusion of every stage in criminal proceedings from the initial reporting of the crime to the trial itself usually depends upon the cooperation of witnesses and the part. Their role at the trial is particularly important in the system where the prosecution must prove its case by leading evidence and all the proper facts,  often in the form of the oral examination of witnesses, which may then be challenged by the defence at a public hearing and dealing in a very particular way. The whole case of the prosecution can fall only on a false statement of the witness or false evidence of the witness. Similarly the Indian Evidence Act, nowhere expressly mentions the phrase “hostile witness” and this terminology has been adopted from common law. In common parlance, a hostile witness is understood as one who is adverse to the position of the party who is questioning the witness, even though the attorney called the witness to testify on behalf of his client. When a witness becomes openly antagonistic and makes inconsistent statements, the attorney can pray from the court to declare him as hostile and thereby get the opportunity to cross-examine him. In India, in most of the cases involving the rich and the influential people or corrupt politicians, witnesses turn hostile, making the rule of law a mockery.  Before proceeding with this paper, the researcher proposes to take a look at the following instances which highlight the gravity of the situation: Whether it’s a case of Best Bakery case, Jessica Lal or BMW Case it has been found in most of the high profile and even in normal cases also, an eye witness of the Case become hostile during the trial of the case.
Hostile Witnesses
Section 154 deals with questions by the party to his own witness and this section is in relation to hostile witness. A hostile witness is one who makes a statement against the interest of the party who calls him. This section permits the court to allow the hostile witness to be subjected to cross-examination by his very own party against whom he has turned hostile. It means that the hostile witness can be asked about the following:
The supreme court in the case Bhola Nath Kushwala vs the state of M.P, held that an independent witness turning hostile is not a ground for acquittal and this thing is also stated in the case Sat Pal vs Delhi administration, that a hostile witness is described as one who is not desirous to telling truth at the instance of the party calling him and an unfavorable witness is one called by a party to prove a particular fact, who fails to prove such fact or proves an opposite fact.
Impeaching credit of the witness
Section 155 deals with it and it lays down the methods in which credit of a witness can be impeached by the adverse party or in case of a hostile witness by his own party. Following are the three methods:
Reasons for Witnesses turning hostile
The Supreme Court in the case of Krishna Mochi v. State of Bihar pointed out that one of the reasons witnesses are afraid of deposing in court against an accused is because of threats to their life, more so when the offenders are habitual criminals or influential people in the Government or enjoy a nexus with individuals who are in either politically or economically well connected.
Conclusion
The problem of witness turning hostile is one of the major problems in the justice delivery system in India and one of the major reasons is the protection of witnesses during and after trial. Witnesses in the cases involving high profile names are extremely vulnerable to criminal intimidation. This involves the use of muscle or money power by the criminals to force the witnesses to retract from the statement given by them against criminals during the trial. In the present scenario, it is necessary to give protection to the witnesses, especially in cases of heinous crimes like rape, murder, and other Socio-economic offences, etc. but unfortunately, most of the countries of the world including India does not have adequate laws relating to treatment and protection of witnesses. The Anti-corruption department should also work through it and make this way better in all processes.
There is a need for a comprehensive law for the protection of witnesses. In the absence of comprehensive law, witnesses not only feel unsecured but also no remedy is available to them for the injuries caused to them.
References
[1] Legal Dictionary, available here.
[2] Devgan, Section 191: Giving False Evidence, available here.
[3] Worldcat, available here.
[4] Sabrang India, available here.
[5] Indian Express, available here.
[6] Economic Times, available here.
[7] Bhola Nath v. The State, available here.
[8] Union of India v. K P Joseph & Ors., AIR 1976 SC 303
[9] Shyam Lal v. Stae of Uttar Pradesh, AIR 2003 SC 886
[10] Swaran Singh v. State of Punjab, (2000) 5 SCC 668